Rome police officer allegedly killed by US students was unarmed 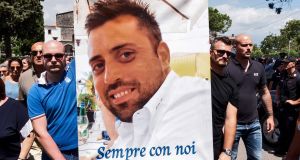 Mourners carry a photograph of Italian police officer Mario Cerciello Rega at the end of his funeral Mass in Somma Vesuviana, near Naples. Photograph: Eliano Imperato/AFP

A policeman killed in central Rome last week was unarmed and unable to defend himself due to the speed with which he was attacked, Italian investigators have told reporters.

“He only had handcuffs with him,” police commander Francesco Gargaro said at a press conference in Rome on Tuesday. “Even if he had a gun, there was no chance to use a weapon, the two officers were attacked immediately.”

Mr Gargaro said Mr Rega, who was on duty in plain clothes, left his pistol at his barracks.

“He wouldn’t have imagined that [the assailants] would be armed,” Mr Gargaro added.

Police said that Mr Elder confessed to the killing after the murder weapon was found in a hotel room the teenagers from San Francisco were sharing. Mr Elder told police he had brought the 18cm knife in a suitcase from the US, but did not explain why.

Prosecutor Michele Prestipino said that the teenagers’ rights were respected during questioning after a photograph emerged on Sunday of Mr Hjorth blindfolded and handcuffed, shortly after his arrest.

“The interrogations were carried out with respect for the law . . . with all guarantees of the defence, in the presence of defence lawyers and interpreters,” he said.

Hundreds of people, including Italy’s two deputy prime ministers, attended Mr Rega’s funeral on Monday, held in the same church where the policeman was married less than two months ago. He had only recently returned to work after his honeymoon.

In a case that has shocked Italy, Mr Rega and his colleague were confronted by the two Americans in the wake of a drug deal gone wrong, a court heard on Saturday.

The Americans, said to have been in Rome on holiday, allegedly went to Trastevere, a neighbourhood popular with tourists and young people, late on Thursday night in search of cocaine, the court heard. There they met a middleman, who took them to a drug-dealer, who in turn sold them aspirin instead of the requested drug.

In retaliation, police said they snatched the middleman’s rucksack, which contained his mobile phone, and fled before demanding a cash ransom and cocaine to return the bag.

The middleman was able to contact the pair after calling his phone, and arranged to meet them in the nearby Prati area, the court heard. But he had also contacted police after reporting the theft, and the two officers went to the site.