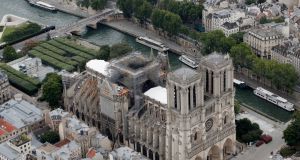 The fire that nearly destroyed Notre Dame cathedral on April 15th melted 400 tonnes of lead in the steeple and roof. Photograph: Philippe Wojazer/Reuters

Reconstruction work on Notre Dame cathedral has been suspended and two schools have been shut down after high concentrations of lead were discovered in the vicinity of the stricken monument.

The fire that nearly destroyed the 850-year-old cathedral on April 15th melted 400 tonnes of lead in the steeple and roof. Some fell into the transept, but large amounts were transformed into dust that was carried west by the wind.

Authorities at the regional health agency ARS and Paris town hall have attempted to minimise the threat to public health, but the investigative website Mediapart, Le Monde newspaper and particularly the Robin des Bois environmental group, warn of a looming public health disaster.

Robin des Bois filed a lawsuit “against X” in the Paris high court on July 26th for “endangering the lives of others, failure to assist persons in danger and criminal negligence in informing the population”. A procedure “against X” allows civil plaintiffs to sue culprits whose precise identity is not known.

Jacky Bonnemains, the director of Robin des Bois, told France Info radio: “Behind this X, we are targeting all involved . . . the Paris town hall, the town halls of the fourth, fifth and sixth districts, but also the ARS.”

Bonnemains accuses authorities of having known on the night of the fire that “hundreds of tonnes of lead were being reduced to dust”. Had officials warned “onlookers, tourists, journalists and residents who watched from open windows” they could have taken precautions, he adds.

Up to 1.3 million micrograms of lead per square metre have been found in samples collected next to the cathedral. Across the Seine and within sight of the burned-out structure, 28,400 micrograms per square metre were found at the Saint-Michel fountain, which is still swarming with tourists.

The RER commuter train station at Saint-Michel was shut for several days in late June when sticky lead residue, believed to have been carried on the soles of passengers’ shoes, was found on a passageway. The station was scrubbed down and reopened.

The World Health Organisation says: “There is no concentration of lead in the blood that is not dangerous.”

Annie Thébaud-Monny, a public health expert at the national health institute Inserm, told Le Monde: “The levels found are gigantic. They are comparable to what one sees at battery or appliance recycling plants. They show massive contamination which will obviously claim victims.”

Thébaud-Monny accuses Paris town hall of “criminal lies” and says its minimisation of the danger is catastrophic. “Necessary precautions were not taken. There must be medical follow-up, for life, because, as with asbestos, cancers can appear 10, 20 or 30 years later.”

Exposure to lead, by inhaling or ingestion through the mouth, can cause cancer, damage kidneys and reproductive organs and disrupt the digestive tract and nervous system. At the end of April, the Paris prefecture told residents near Notre Dame to “clean their home or office with damp clothes” to remove dust from the fire. The ARS later told them not to chew fingernails and to “wash frequently children’s toys and other objects they might put in their mouths”.

Pregnant women and children under the age of seven on the Ile de la Cité have been advised to have their blood tested for lead poisoning, “as a precaution”.

The Paris town hall announced on July 26th that it was closing a nursery school and an elementary school used for summer leisure activities in the rue Saint-Benoit, in Saint-Germain des Prés, about 2km from Notre Dame. Samples showed 7,000 micrograms of lead per square metre in one of the school courtyards. Levels were normal inside the classrooms, the town hall emphasised.

Michel Cadot, the prefect of Paris, announced on July 25th that he was stopping reconstruction work at Notre Dame at least through the end of this week, based on a report from work inspectors. Precautions were “not uniformly followed and decontamination installations were insufficient”.

Press photographs since the catastrophe show some workmen wearing helmets, masks, gloves and hazardous materials suits. Others wear suits but no gloves or masks. Mediapart claims the ministry of culture vetoed a plan to have men in full protective gear decontaminate the esplanade in front of the cathedral for fear it would terrify passersby.

Street-sweepers and shopkeepers, tourists and local residents have no protection. The firemen’s union wrote to ARS on May 13th demanding to know what measures were taken to decontaminate fire engines that went to the site, and the firemen themselves. They are still waiting for a reply.