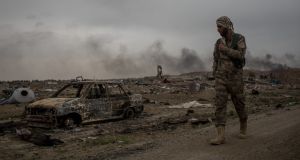 The Kurdish-led administration that runs much of northern Syria called on Monday for an international tribunal to be set up in their region to try the thousands of suspected Islamic State members they are detaining.

The Kurdish-led Syrian Democratic Forces on Saturday proclaimed the capture of Islamic State’s last territory in Syria, but no clear international policy has emerged yet about how to deal with the militants it captured there and at other strongholds of the group.

“We call upon the international community to establish a special international tribunal to prosecute Islamic State terrorists in northern and eastern Syria,” the statement said.

Thousands of suspected Islamic State members and fighters from Syria, Iraq and other countries are in the custody of the US-backed group.

An Irish woman, Lisa Smith (37) from Dundalk, who is suspected of association with Islamic State in Syria, is currently in a Syrian Democratic Forces-controlled refugee camp. The Government has said it will try to bring her back to Ireland.

The administration’s statement argued that the jurisdiction of the courts should be where the criminal act happened and where the offenders were captured in order for there to be a fair trial in line with international law and human rights conventions.

The Kurdish-led administration said it had appealed to the international community to take responsibility for the detainees, especially for nations to take back their own citizens.

“Unfortunately, there was no response or initiatives in this respect,” the statement said.

The people who left the final enclave at Baghouz, near the Iraq border, have been sent to camps in northeast Syria. One of those, al-Hol, was already overcrowded with uprooted Syrians and Iraqis and camp officials have said they do not have enough tents, food, or medicine. Aid workers warn of spreading disease, and dozens of children have died on the way there.

Many foreign governments see the detained suspected militants as a security threat and have been loath to accede to SDF entreaties to repatriate them. – Reuters