Theresa May hints she may drop third vote on Brexit deal 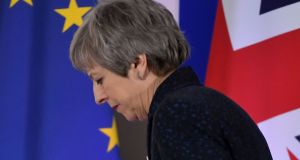 British prime minister Theresa May told MPs: ‘If it appears that there is sufficient support and the Speaker permits it, we can bring the deal back next week.’ Photograph: Emmanuel Dunand/AFP/Getty Images

British prime minister Theresa May hinted on Friday that she might not bring her European Union withdrawal deal back to parliament for a third time next week if there was not enough support for it to be passed.

Mrs May’s Brexit deal has already been twice rejected by lawmakers but the prime minister was expected to try a third time next week.

An EU summit on Thursday granted an extension to the UK’s departure from the bloc to try to give her time to get her deal through parliament, but in a letter to lawmakers on Friday, she suggested that such support might not be forthcoming.

“If it appears there is not sufficient support to bring the deal back next week, or the House rejects it again, we can ask for another extension before April 12 - but that will involve holding European Parliament elections,” she wrote in a letter published on Twitter by a BBC reporter.

“If it appears that there is sufficient support and the Speaker permits it, we can bring the deal back next week and if it is approved we can leave on 22 May.”

MPs at Westminster could vote next week on a number of options for Brexit, including Mrs May’s deal, after European leaders set a new deadline of April 12th for Britain to decide how it wants to leave the EU. A cross-party group of MPs has tabled an amendment to a motion on Monday that would open the way to “indicative votes” later next week.

NEW: Theresa May has written to all MPs tonight ahead of crunch week at Westminster - offering talks with MPs who want them pic.twitter.com/64Hz5n1UB8

“Following a series of meetings with MPs from all parties, EU leaders, businesses and trade unions, I am convinced that a sensible alternative deal can be agreed by parliament, be negotiated with the EU and bring the public together, whether they voted Leave or Remain,” Labour leader Jeremy Corbyn said.

“It’s time for parliament to take control of the Brexit process from this failed prime minister, and end the chaos and confusion created by the government’s divisions and incompetence.”

Business secretary Greg Clark suggested the government would offer MPs such a choice if, as expected, they rejected Mrs May’s deal for a third time next week.

“The government will facilitate . . . the ability for parliament to express a majority of what it would approve,” he told the BBC.

The move towards indicative votes comes amid mounting speculation at Westminster over Mrs May’s future as prime minister. She survived a confidence vote among Conservative MPs last December so she is safe from a similar challenge until next December.

But her handling of the Brexit negotiations and her mismanagement of the Conservative parliamentary party has persuaded many of her own MPs that she must step aside soon, or at least announce her intention to do so.

EU leaders agreed in Brussels on Thursday night that, if MPs approve the prime minister’s Brexit deal next week, Britain can remain in the EU until May 22nd. The deal’s prospects took a fresh blow on Friday when DUP deputy leader Nigel Dodds accused Mrs May of capitulating to the EU and securing no changes to the withdrawal agreement.

“Nothing fundamentally turns on the formal ratification of documents which the attorney general has already said do not change the risk of the UK being trapped in the backstop,” he said.

“The DUP has been very clear throughout that we want a deal which delivers on the referendum result and which works for all parts of the UK and for the EU as well. But it must be a deal that protects the Union. That remains our abiding principle. We will not accept any deal which poses a long term risk to the constitutional and economic integrity of the United Kingdom. ”