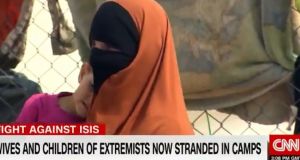 The Minister for Foreign Affairs has confirmed the Government’s commitment to try and bring home Irish citizen Lisa Smith, suspected of association with Islamic State in Syria.

Tánaiste Simon Coveney said Ireland has a responsibility to both her and her two-year-old daughter.

He was speaking after Ms Smith (37) told CNN that she wants to come home.

Ms Smith (37) from Dundalk, Co Louth left for Syria about five years ago, after stepping down from the Air Corps where she served as a flight attendant on the Government jet at the rank of corporal.

Asked was she ready that she might end up in jail if she went home, she said: “I know they’d strip me of my passport and stuff and I wouldn’t travel and I’d be watched kinda. But prison, I don’t know. I’m already in prison.”

The Defence Forces has declined to comment but it is understood it has been asked to come up with a series of options for how to bring Ms Smith home from the war-torn country.

These include the potential of military intelligence, the highly trained Army Ranger Wing and the Air Corps. One option being considered is getting Ms Smith and her child to the Turkish border before flying her back to Ireland.

It is understood she is in the camp along with her two-year-old daughter and hundreds of other wives and children of Islamic State (Isis) fighters.

Mr Coveney said: “The Government’s position is that we consider her case a consular case. Like all consular cases, we want to look after Irish people and bring them home if they want to come home …. Of course there is heightened concern because there is a two year old girl involved in this as well” .

Mr Coveney said officials from his Department were meeting with officials from the Departments of Defence and Justice to co-ordinate a response in relation to how the State might assist Ms Smith. He was speaking at Cork Airport where he was officially opening a new Airport Control Centre.

“This is an unusual case because of her background in the last number of years. But the Taoiseach and I have made it very clear she is an Irish citizen and she is the responsibility of Ireland and we are very conscious of that,” he said

“We have a responsibility towards her and, in particular, her daughter. We will try to follow through on that responsibility and find a way to bring her home. Part of the problem here is that this is a war zone or at least a former war zone and it is not that easy to actually get into these places.”

Mr Coveney pointed out that Ms Smith does not have the capability to communicate easily from where she is currently being held at a Syrian Democratic Forces-controlled refugee camp.

“We have not had direct contact from her. She has in the past contacted her family. We are staying in close contact with her family and keeping them informed.I spoke to her brother and have given her family a commitment that we would keep them informed at all times and we will.”

“They are in a war zone, in a camp that was linked to partners and children of ISIL fighters - (operated and controlled) largely by Kurds so it is more complicated than most consular cases would be to put it mildly.

“But, that being said, we do have a responsibility here as a State both to her and, in particular, we have a duty of care, I would say, to a two year old Irish girl who happens to be in a very vulnerable situation and we are taking that seriously.”

Speaking on RTÉ’s Morning Ireland the CNN reporter Jomana Karadsheh Scott said her producer was was approached by a woman who said she was from Ireland and told him that she was “quite famous back home”.

“Of course we had read some of the media reports out of Ireland about her situation so I did ask her that question. I said I’ve only heard of one Irish woman who joined Isis many years ago, that she was a member of the forces, she said, yes, that’s me,” Ms Karadshesh said.

“I did ask her if she was ready for any possible prosecution, to face any charges when she gets back home, she doesn’t seem to think that this will be the case, she thinks she might get interrogated, she might not be able to travel, but she’s willing to take the chance whatever it is. She says she just wants to get back home because she just cannot stay in that camp for ever”.

US-backed forces on Saturday said they had captured Islamic State’s last shred of territory at Baghouz in eastern Syria, ending its territorial rule over a self-proclaimed caliphate after years of fighting.