They were trying to delegitimise us in every way they could, so we decided to leave’ 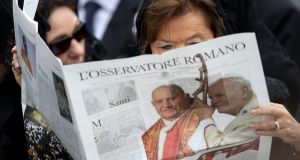 A woman reads a copy of the Vatican newspaper L’Osservatore Romano as she waits for the canonisation ceremony in St Peter’s Square at the Vatican in April 2014. Photograph: Reuters

The founder and the entire editorial board have quit a Vatican women’s magazine that has drawn international attention for exposing the abuse of nuns, citing a “climate of distrust and progressive delegitimisation” of their work inside the Vatican’s communications office.

In a letter of resignation to Pope Francis, Lucetta Scaraffia, the founder and editor of Women Church World, wrote that the editorial board members, all women, felt in the last few months, that a hierarchy dominated by men was marginalising them and did not value their work.

“It seems to us that a vital initiative is being reduced to silence, to return to the antiquated and arid method of the top-down selection, under direct male control, of women who are perceived as being reliable,” Ms Scaraffia wrote in the letter, dated March 21st, which was provided to The New York Times. Instead of promoting fruitful discussion, the Vatican preferred to return to a “clerical self-referential” mode, she wrote.

The monthly magazine, published by the Vatican newspaper L’Osservatore Romano, has focused on women’s issues and on the role of women inside the Roman Catholic Church. Recently it had become a forum for revealing and discussing hardships faced by some nuns around the world, including the exploitation of their labor and sexual abuse by priests.

The magazine was created seven years ago under Pope Benedict XVI, and Scaraffia said that until recently, it had editorial independence and papal support, first from Benedict and then from Francis. That changed when Andrea Monda became the new director of L’Osservatore Romano in December, Ms Scaraffia said in an interview on Tuesday. She said that Monda began participating in the magazine’s editorial meetings along with journalists from his newspaper. The staff of the magazine felt controlled, she said.

“No one had ever imposed on us people from the outside,” she said. In a statement issued by the Vatican press office, Mr Monda denied that he had tried to meddle with the magazine, which he said enjoyed “the same total autonomy and the same freedom that have characterized the monthly insert since it was born.”

He said he had limited his involvement to suggesting possible themes and contributors to Scaraffia. After the board of the magazine threatened to resign in January, “they pretended to accept our autonomy,” she said. But the board felt its work was being undermined when L’Osservatore Romano began publishing its own articles about women’s issues, with a different editorial slant.

“They were trying to delegitimise us in every way they could, they wanted to sabotage the magazine, so we decided to leave, before they took us out,” she said. The resignation letter was to be announced in the next edition of the magazine, which is scheduled to be published next Monday. Ms Scaraffia said she did not know whether there would be an issue at all. Monda said the magazine would continue to be published. That office has been undergoing an overhaul. The Holy See’s chief spokesman and his deputy resigned in December. “They wanted us out because we were autonomous,” Ms Scaraffia said. “They want only people controlled by them.” – New York Times