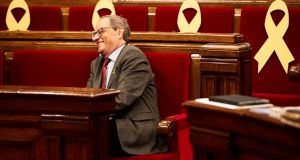 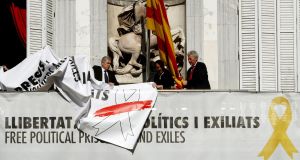 Staff replace a banner with another one with the same message but depicting a white ribbon instead of the previous yellow one, at the Catalan regional government headquarters, in Barcelona. Photogrpah: EPA/Toni Albir

A new front has opened up in the conflict between the government of Catalonia and the Spanish state, after the region’s president, Quim Torra, faced legal action for failing to keep official buildings free of symbols associated with the independence movement.

The electoral board has announced it will file a complaint against Mr Torra before the state prosecutor for violating the political neutrality of government buildings.

Yellow ribbons have been hung from apartment balconies, park railings and other spaces across Catalonia in recent months as a show of solidarity for nine politicians and civic leaders who were imprisoned ahead of their trial for sedition and rebellion which began last month.

The Catalan government has also hung yellow ribbons from its buildings, as well as a banner reading “Free political prisoners and exiles” in Catalan and English from the façade of its headquarters in Barcelona. In addition, the regional government has hung the estelada, the red and yellow flag bearing a star that represents the secessionist cause, from its buildings.

However, earlier this month, Spain’s electoral board ruled that such symbols were overtly political, meaning that they should not be visible on government buildings ahead of elections. Spain will hold a general election on April 28th, with European and local elections following in May.

Mr Torra ignored an initial deadline issued by the electoral board for the removal of the symbols. However, when another ultimatum was issued this week, he said he would follow the non-binding advice of the Catalan ombudsman’s office, which suggested that the symbols should be taken down.

In a statement on Wednesday, Mr Torra said his government, “despite its political will, will follow the recommendations of [the ombudsman] while maintaining full respect for freedom of speech”.

Yet on Thursday morning, Catalan government employees were seen covering up the “Freedom for political prisoners and exiles” banner with another, bearing exactly the same slogan, albeit with a white, rather than yellow, ribbon next to it, prompting the electoral board’s legal action.

Earlier this week, the Spanish government warned that it saw the Catalan government’s approach to the standoff as a step too far.

“Until now they have kept up a rhetoric which has been irritating, sometimes unacceptable, but they didn’t step over the line,” said government spokeswoman Isabel Celaá. “With this they would be doing that.”

Mr Torra could face a fine and the possibility of being barred from office if the case against him proceeds.

In the Catalan parliament this week, the leader of the unionist Ciudadanos party in the region, Inés Arrimadas, criticised Mr Torra for failing to obey the electoral board ruling. “What part of ‘take down the separatist propaganda’ do you not understand?” she asked him.

Mr Torra replied: “If you think yellow ribbons are political symbols then you must accept that we have political prisoners.”