‘People just want it all to end . . they just want to know if they’re in a hellhole or not’ 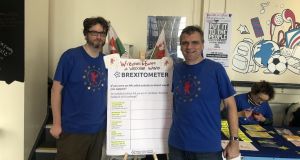 Alex McMahon and Stefan Paudler with the ‘Brexitometer’, which seeks to divine local opinion.

Standing in the student bar in Wrexham Glyndwr University in the North Wales town, Wrexham for Europe activist Stefan Paudler mans the “Brexitometer”, which seeks to divine local opinion.

Participants can place a star beside one of five Brexit options outlined in Welsh and English: “Leave the EU with no trade deals” “Renegotiate Theresa May’s Deal” “Call a general election” “Hold a People’s Vote” and “Revoke Article 50 and Stay in the EU.”

In Wrexham town, where 59 per cent of people voted leave, people generally choose the most divisive first and last options. Here, in the liberal environs of the university, students are largely choosing “Revoke Article 50”.

Paudler is German but has lived in the UK for 24 years. “I thought of it as a tolerant country that accepted people. The few times xenophobia came it was disguised as friendly banter. I never took it the wrong way.” He pauses. “Maybe I never took it the right way. There was this xenophobic vibe hidden beneath the surface.”

We just try to get the facts out, not tell people what to think. A lot of people don’t even realise we have European elections

On the table there are stickers that read, “Brexit is Bonkers” and “Bollocks to Brexit” as well as fliers for a big march at the weekend in London and lots of information sheets. “A lot of it is about education,” says Paudler’s friend, Alex McMahon. “We just try to get the facts out, not tell people what to think. A lot of people don’t even realise we have European elections.”

Brexit is not just an abstraction for McMahon. He lost his job as a laboratory analyst when, with all the post-referendum uncertainty, his pan-European company cut its losses and left Wales. Angry people come up and argue with them all the time, he says. “They say we’re being funded by the EU or by George Soros.” He sighs. “For lots of people ‘reality’ is whatever their belief system is.”

Nearby, housing agency workers Andy Lovett, Eli Smith and Andy Jones are eating lunch. Lovett volunteers as a poll clerk and has done so for many years. “Turnout for the referendum was massive,” he says. “It didn’t stop . . . People were getting their 80-year-old grandads out of bed who hadn’t voted in years.”

They voted remain. Like a lot of left-leaning Welsh people, they trust the EU to redistribute money to Wales more fairly than Westminster. Lovett is also worried about the Irish Border. His wife of 25 years is from Derry and he remembers the towers and the Border posts and the soldiers. He doesn’t want to go back to that, he says.

Why does he think people voted to leave? Immigration, he says. “I think it’s a bit of a bigoted vote. And it’s so short-sighted. So much here is funded by the EU. My brother voted to leave and he works for Airbus.” (The aerospace firm has warned it might have to leave the country in the event of a no-deal Brexit.)

“A lot of the leave voters don’t want to talk about it any more,” says Jones. “I think a lot would change their minds.”

John Gilbert, the co-ordinator for Vote Leave Wrexham, whom I met first in 2016, is away for my return visit, but he sends me a picture of a bloodied knight with arrows in his back (“Betrayed by our own leaders”). He also sends me the contact details for Ukip Wrexham’s chairwoman Jeanette Barton, who, perhaps surprisingly for a Ukip activist, doesn’t think immigration was a big factor in the vote.

She tells me that Britain voted to get its “identity back”. She despairs of inept politicians, hopes Brexit is still going to happen and insists that everyone was very well informed before voting. What about the Irish Border? We discuss this for a while before she concludes, “That is very complex. Maybe that’s the type of thing that should have been gone into before. I agree that should have been looked into far more.”

It wasn’t explained properly. They should have explained it in terms of what we’d get and what we’d lose

I wander around Ty Pawb (it means “Everyone’s House”), a cultural community centre with market stalls and artistic spaces. A leave-voting stallholder who doesn’t want to give her name tells me that she is frustrated by the whole process. “It wasn’t explained properly. They should have explained it in terms of what we’d get and what we’d lose. It was stupid to bring it to the table without having a deal worked out.”

Why did she vote leave? “Immigration. There are people here who shouldn’t be here.”

It turns out she means Islamic terrorists. I point out that those people aren’t likely to be EU migrants. “But they come here through the European courts,” she says.

She doesn’t mind most immigrants, she adds. “People who come here and work hard. Doctors and nurses. We need them for the NHS.”

What if Brexit makes it hard for those people? “Like I said, we didn’t understand it. It’s not going to happen though is it?”

How did her friends vote? “Most voted out. A lot didn’t vote. Did you vote?” she asks a friend.

Would she vote to remain if there was a second referendum? “I probably wouldn’t vote.”

Alun Gilpin, who is manning his comics and model stall, Border Collectibles, was conflicted about the referendum initially. He didn’t like TTIP (the Transatlantic Trade and Investment Partnership) and disliked what he saw as the EU’s globalisation agenda, but he ultimately voted remain.

During the referendum campaign he was appalled by the lack of planning (“the plan was a blank sheet of paper”) and recoiled from the racism and misinformation. “Only 7 per cent of our laws come from the EU,” he says. He calls Jacob Rees Mogg “a disaster capitalist”. He points at a shelf full of Subbuteo boxes. “All of that comes from Italy.”

Two close friends voted to leave, he says, due to misinformation about immigration. One would vote differently now, he says, “but the other could be slapped in the head with a brick and wouldn’t change his mind”.

John Fairhurst, a Liverpudlian party supply salesman, is a leave-voting optimist. “They say we were misled but that’s just how politicians say we’re thick,” he says. “We get that a lot in the North.”

He believes that when people voted leave, they wanted to extract themselves from the customs union and the single market and that this should be clear to “waste of space” policy-makers.

Was it not always destined to be messy for businesses? Not at all, he says. He deals with a supplier in Belgium and there has been no hint of a problem. “People will still talk to each other. There’s the phone. There’s the internet . . . Everyone wants to do business.”

But why risk it? “It’s important for Britain to control it’s borders.”

What about the Irish Border? He tells me that a relative was caught recently after not paying a toll on the Runcorn Bridge. So, border monitoring technology, he suggests, is already there in the hands of the tolling companies. He is defiantly positive about all this. “The sun will still rise the morning after.”

They’re so fed up of the paralysis they just want to know where we are, even if that is in a hellhole

Ian Lucas, Labour MP for Wrexham, was a remain supporter who, in deference to his Leave-voting constituents, voted to invoke Article 50 (“I’ve been accused of betrayal by both sides”). He wants to heal the divisions and does not want a second referendum because there’s been “no great shift in opinion”.