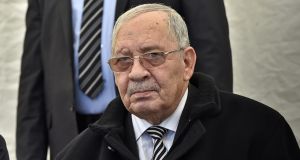 The head of Algeria’s army has demanded that Abdelaziz Bouteflika be removed from office, signalling the end of the ailing president’s nearly two decades in power following weeks of mass protests against his autocratic regime.

Ahmed Gaid Salah, the army chief of staff who was once part of Mr Bouteflika’s inner circle, called for the office of president to be declared vacant under a constitutional provision relating to the health of the incumbent.

Gen Salah said in a statement that “a solution has to be adopted which guarantees the satisfaction of all the legitimate demands of the Algerian people and which also guarantees respect of the constitution”.

The army is a key power behind the ruling regime and its view on whether Mr Bouteflika should remain in power has been deemed critical since protests erupted against the president last month.

The nationwide demonstrations – the largest in decades – erupted after Mr Bouteflika (82) announced he would be seeking a fifth term at presidential elections scheduled for April 18th.

Algerians were infuriated that the regime felt it could impose a candidate who has not spoken in public since suffering a stroke in 2013. At the time his candidacy was formally declared, Mr Bouteflika was receiving medical treatment in Geneva.

On his return to the country, the president sought to appease the protesters by announcing that the elections would be postponed. Instead, a national conference would be held that would discuss reforms and set a new date for an election at which Mr Bouteflika would not stand.

But the protests continued and increasing numbers of the president’s allies deserted him, including politicians, business people and labour unions

Gen Salah cited article 102 of the constitution, which calls for the speaker of parliament to carry out the duties of the president for 45 days if he is incapacitated.

By demanding the application of a constitutional provision, analysts said the general was seeking to signal that the military was not carrying out a coup. – Copyright The Financial Times Limited 2019