EU defends decision to label goods made in Israeli settlements

US claims court ruling was anti-Israel 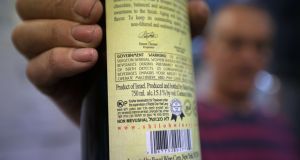 Amichai Luria presents a bottle of his wine, sold mainly for export, at the Shilo winery in the Jewish settlement of Shilo in the occupied West Bank. The EU announced that goods from settlements - Jewish communities built in areas occupied by force in 1967 – must be specifically labelled, infuriating Israel. Photograph: Getty Images

The EU has robustly rejected allegations by the US that an EU court decision prohibiting the mislabelling of illegal settlement exports as Israeli reflects an “anti-Israeli bias”.

A “deeply concerned” statement from the US state department on Tuesday deplored the ruling of the Court of Justice of the EU (CJEU) which required goods from illegal settlements in the Israeli-occupied territories to be labelled as such, claiming it was an effort “economically to pressure, isolate, or otherwise delegitimise Israel”.

Senior EU officials on Thursday rejected the claim, insisting that the labelling policy, required since 2015, was not targeted at Israel itself but the illegal settlements in the occupied territories whose status as part of Israel is not recognised by the international community.

“It is not anti-Israel but anti-settlement,” one official said.

It was not a ban on or boycott of such products, the officials said, but an attempt to provide consumers with a means of making their own informed choice about whether to buy such products.

They rejected the claim that Israel was being singled out. The regulation required all product labels not to be misleading, wherever they came from.

On Tuesday the Luxembourg-based CJEU in the Psagot Case ruled that foodstuffs, in this case specifically wine, sourced in the illegal Israeli settlements of the occupied territories must be labelled clearly indicating their origin in such settlements if they are to be sold inside the EU.

It said that such labelling, rather than labels referring to “state of Israel”, is necessary, to prevent consumers from being misled as to the fact that the state of Israel is present in the territories concerned as an occupying power and not as a sovereign entity.

The court noted that, under EU regulations, the provision of information to consumers must enable them to make informed choices, with regard not only to health, economic, environmental and social considerations, but also to ethical considerations and considerations relating to the observance of international law.

Israeli exports to the EU last year totalled some €13.6 billion, of which the European Commission roughly estimates that some €100 million may come from the settlements. Such goods should not benefit from the preferential trade terms offered to Israel, the officials say.

The court decision, the state department claimed, “serves only to encourage, facilitate, and promote boycotts, divestments, and sanctions (BDS) against Israel. The United States unequivocally opposes any effort to engage in BDS, or to otherwise economically pressure, isolate, or otherwise delegitimise Israel . . .

“America stands with Israel against efforts to economically pressure, isolate, or delegitimise it.”

The charge, supporters of the Palestinian cause say, is tantamount to accusing the EU of anti-Semitism as the BDS movement, a particular bete noir of the Israeli authorities, is so characterised by its government.

The EU does not support the BDS calls for trade boycott or divestment from Israel, but has rejected concerted attempts by supporters of Israel internationally to tar such campaigns as anti-Semitic or beyond the pale of legitimate protest.