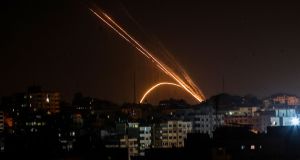 Rockets being fired from the Gaza Strip towards Israel on Wednesday. Photograph: Anas Baba/AFP/Getty Images

After intensive mediation efforts involving Egypt and the United Nations, a ceasefire was declared early onThursday morning to end the violence between Israel and Gaza militants that had left 34 Palestinians dead and brought the southern Israel to a standstill.

Six hours after the truce was declared five rockets were launched from Gaza, sending Israelis running to their bomb shelters again.

The Israeli army said it was remaining on high alert and preparing for any eventuality, although schools and businesses were reopened throughout the country.

UN special co-ordinator for the Middle East Nickolay Mladenov said the coming days will be critical and both Israel and the Palestinian factions in Gaza must refrain from further violence if they want to prevent the outbreak of another Gaza war.

The violence erupted after Israel killed Baha Abu al-Ata, the Islamic Jihad commander of the northern Gaza Strip, in a pre-dawn strike on Tuesday. Israel said he had been responsible for the firing of many rockets at Israel in recent months and was planning an imminent attack.

Islamic Jihad spokesman Musab al-Berim said the truce went into effect after Israel agreed to a list of demands set by the militant group.

“An end to targeted killings in the West Bank and Gaza, an end to attacks on civilians during the weekly Gaza March of Return border protests and a commitment to abide by [existing] agreements pertaining to Gaza.”

Palestinian officials reported 34 deaths and more than 100 injured, including a 7-year-old boy and six members of a single family, in the two days of fighting. Gaza officials confirmed that 19 of the fatalities were militants. Israel claims 25 Palestinian gunmen were killed.

Israeli officials expressed satisfaction with the outcome of the fighting, noting that even though 450 projectiles had been fired by militants, no Israelis had been killed and, critically, Islamic Jihad had failed to drag Hamas, which controls Gaza, into the fighting.

Seventy seven Israelis were injured, mostly from falling while running to bomb shelters or suffering from shock.

“The purpose of the operation was to target the Islamic Jihad commander in the Gaza Strip. He was eliminated and with him dozens of terrorists. Dozens of important Islamic Jihad infrastructure targets were also eliminated,” he said. “Our enemies got the message. We can reach anyone, even in their beds.”

Not all Israeli politicians were satisfied with the outcome. Avigdor Lieberman, head of the right-wing Yisrael Beiteinu, accused Mr Netanyahu of co-operating with Hamas.

“Netanyahu is currently sacrificing basic strategic interests on the altar of short-term achievements,” he said.