US president Donald Trump has denied testimony from the top US diplomat in Ukraine who linked Trump more directly to a pressure campaign on Ukraine to conduct investigations that would benefit him politically. Video: The White House 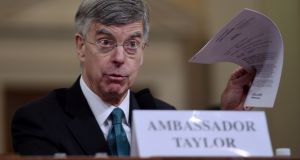 Bill Taylor, the US ambassador in Ukraine, alleged that one of his staff members overheard US president Donald Trump asking a senior US diplomat about the status of investigations he requested from Ukraine, on the first day of public impeachment hearings on Capitol Hill.

The new claim was one of the key pieces of information to emerge on Wednesday in the first in a series of public testimonies, as Democrats advance their impeachment inquiry into Mr Trump’s dealings with Ukraine.

In his opening statement, Mr Taylor told members of the House intelligence committee that since testifying privately last month, a staff member had informed him that he had overheard Mr Trump speaking to Gordon Sondland, the ambassador to the EU, by phone at a restaurant, the day after a July 25th phone call between Mr Trump and Ukrainian president Volodymyr Zelenskiy.

During that July 25th call, which is the focus of the impeachment inquiry, the US president asked his Ukrainian counterpart to investigate his political rival Joe Biden and his son Hunter, who sat on the board of a Ukrainian energy company.

Mr Trump denies there was anything improper about the call or that Mr Zelenskiy was offered a quid pro quo in return for an investigation into the Bidens.

According to Mr Taylor, the aide then asked Mr Sondland what the president had said. “Ambassador Sondland responded that president Trump cares more about the investigations of Biden, which Giuliani was pressing for,” Mr Taylor said, referring to Mr Trump’s personal lawyer, Rudy Giuliani.

It was reported on Wednesday that the aide in question would testify privately before the committee in the coming days. The testimony also raises questions about Mr Trump’s claim in recent days that he “hardly knows” Mr Sondland.

Mr Taylor reiterated his assertion during his testimony on October 22nd that Mr Giuliani and others in the Trump administration, including acting chief of staff Mick Mulvaney, were engaged in an irregular channel of US policymaking with respect to Ukraine.

“Once I arrived in Kiev, I discovered a weird combination of encouraging, confusing, and ultimately alarming circumstances,” he said.

He described how he realised that the Trump administration was not only threatening to cancel a proposed meeting in the Oval Office, but had also decided to withhold promised military aid to Ukraine as it sought to persuade the Ukrainian government to investigate Mr Biden.

He also claims to have been told that Mr Trump wanted a public commitment by the Ukrainian government to investigate Mr Biden and his son.

Mr Taylor told lawmakers that he raised concerns about this policy with Mr Trump’s then national security adviser John Bolton, secretary of state Mike Pompeo, and others.

Mr Taylor and George Kent, a senior official with responsibility for Ukraine matters in the state department, appeared together in the first public session of the inquiry, which was opened by House speaker Nancy Pelosi in September.

“Is this what should Americans expect for their president?” he said of Mr Trump’s actions. “If this is not impeachment conduct, what is?”

Ohio Republican Mike Turner questioned the two witnesses on their reliance on second-hand testimony, noting that neither had spoken to Mr Trump directly. This point was seized upon by White House press secretary Stephanie Grisham, who described the witnesses as “two bureaucrats with a foreign policy gripe”.

Several Republicans called for the whistleblower who lodged the initial complaint about the July 25th phone call to be called to testify privately before the committee, claiming that Mr Schiff knew his identity, but the committee chairman rejected this suggestion.

Speaking in the White House, where he was meeting Turkish president Recep Tayyip Erdogan, Mr Trump condemned the process as a “witch-hunt” and a “hoax”.

“I hear it’s a joke,” he said, adding that his meeting with Mr Erdogan was much more important.

He also said he wanted to find out the identity of the whistleblower, and raised questions about the role of the intelligence services’ inspector general in investigating the complaint. “The whole call that I made was a perfect one,” he said, adding that he plans to release a transcript of a separate phone call he had with Mr Zelenskiy in April on Thursday.

The public hearings will continue on Friday when former ambassador to Ukraine Marie Yovanovitch testifies.