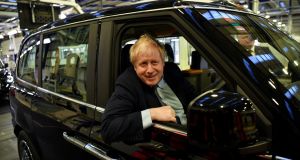 The London Electrical Vehicle Company in Coventry, which makes electric-powered black taxis, should have been an ideal venue for Boris Johnson’s first major campaign speech.

“These amazing machines with their lovely traditional contours, burly, bulging and faintly reminiscent of a black bowler hat but underneath this familiar silhouette there is now technology so advanced that this machine can take you silently from Uxbridge to Upminster,” he said.

“In its ambition and daring I hope you will not mind if I identify this machine as a symbol of my type of Conservative politics, what I stand for and the approach I want to take.”

The assembled factory workers, who had been allowed to knock off at 4.25pm to listen to the prime minister, didn’t mind at all. Unfortunately for Johnson, his visit to Coventry came hours after Elon Musk announced that Tesla was building its first European factory in Berlin, citing Brexit uncertainty as a factor in his rejection of Britain.

But Johnson did not come to Coventry to talk about electric vehicles, he was there to reprise David Cameron’s successful 2015 message that British voters were faced with a choice between a strong and stable Conservative government and a coalition of chaos made up of Labour and the SNP.

Johnson distorted and misrepresented Labour’s policies, claiming that shadow chancellor John McDonnell was planning to introduce exchange controls because he feared a run on the pound. McDonnell responded by describing the prime minister as a “pathological liar”.

About 15 minutes into Johnson’s speech, some of the factory workers had glazed over but his laugh lines went down well and he got a decent round of applause at the end.

Johnson met a cooler reception earlier in the day during a visit to Stainforth in South Yorkshire, where hundreds of soldiers have been deployed to shore up flood defences five days after the region was submerged.

“I’m not very happy about talking to you so, if you don’t mind, I’ll just mope on with what I’m doing,” one woman said as she held a wheelbarrow to help the operation.

Another woman confronted the prime minister over the government’s slow response to the flooding, which has affected 850 homes across the electorally target-rich region of South Yorkshire, the East Midlands and Lincolnshire.

“It took you over five days, you should have been there Saturday morning, having a meeting, making sure that these people get help and support,” she said.

Johnson seemed lost for an answer and unable to show empathy, more comfortable with the roar of the crowd than with the quiet voice of an individual in distress.