Macabre tale of the Russian professor and the severed arms 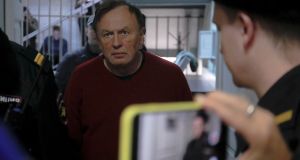 Perhaps because of its disturbing history, there has always been something slightly spooky about Saint Petersburg’s elegant Moika River embankment where Grigory Rasputin, a self-proclaimed holy man and confidante of the last Russian Tsar, was brutally murdered by a member of the Imperial family over 100 years ago.

The area become famous for another macabre killing this weekend when a prominent Russian historian was apprehended while trying to dispose of the severed arms of his girlfriend in the Moika’s icy waters.

Oleg Sokolov (63), a lecturer at the Saint Petersburg State University, and a renowned expert in French military history, has confessed to the murder of his former student, 24-year-old Anastasia Yeshchenko, with whom he shared an interest in dressing up to re-enact the Napoleonic Wars.

The couple had been living together for five years in a flat on the Moika embankment just a few minutes’ walk from the palace where Russian Prince Felix Yusupov shot Rasputin dead in 1916 and shoved the monk’s corpse under the ice of the nearby Neva River in a botched attempt to conceal his crime.

Sokolov – who was arrested in the early hours of Saturday morning after falling into the Moika River in a drunken state – also made a mess of disposing of his murder victim. Police found a pistol and the arms of a woman sawn off at the elbow in the rucksack he was carrying. Yeshchenko’s head and torso were discovered lying by a bloodied saw during a search of the couple’s home.

The gruesome case marks a spectacular fall from grace for Sokolov, who has won international respect for his encyclopaedic knowledge of the Napoleonic Wars. French president Jaques Chirac decorated the historian with the Legion of Honour in 2003 and he was frequently invited to lecture at the Sorbonne in Paris.

In Russia Sokolov is best known as the driving force behind popular annual re-enactments of the 1812 Battle of Borodino, where he would play the role of 19th century cavalry commander in the face-off between the Tsar’s troops and Napoleon’s Grand Armee in the countryside 120km west of Moscow.

Historical cosplay events like these have been encouraged in Vladimir Putin’s Russia as displays of patriotism and national unity. Beyond the Borodino commemorations, Sokolov has been seen playing Napoleon at re-enactments of 19th century balls with Yushchenko dressed as the Empress Josephine dangling on his arm.

Putin’s spokesman Dmitry Peskov spoke in shocked terms about Yeshchenko’s murder on Monday, describing it as “a monstrous act of madness”. The Russian president had been informed about the case, he said.

Sokolov, who was hospitalised with hypothermia after his arrest on the Moika river bank, told police at the weekend that he had been planning to take his own life once rid of his girlfriend’s corpse. Appearing in a Saint Petersburg court on Monday to face a murder charge, the historian , normally known for his arrogant demeanour, looked like a broken man.

Visibly distressed, he explained how Yeshchenko had flown into a violent rage when he revealed plans last Thursday to spend the weekend with the children of his first marriage and he lost control of himself. “There have been a lot of women, but I have never seen such an outpouring of aggression . . . a girl considered as ideal suddenly transformed . . . and then this monstrous misfortune happened.”

The judge denied an appeal by a defence lawyer to hold Sokolov under house arrest and ordered him to spend two months in a pre-trial detention centre on grounds that he would be less able to harm himself if in custody.

As the court hearing came to an end, Russian investigators said that a large bag had washed up on the bank of one of Saint Petersburg’s myriad waterways, believed to contain Yeshchenko’s remains.

A three-day search of the River Moika has not turned up any evidence of the young history graduate’s murder, although in a grim reminder of the area’s violent history, the skull and breast bone of a so far unidentified corpse had been found.

Saint Petersburg State University announced that it had fired Sokolov and broken off all ties with the renowned historian.