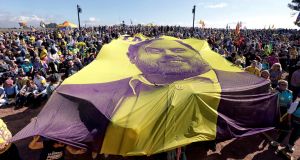 Spain does not have the right to deny a jailed Catalan MEP his right to sit in the European Parliament, the advocate general of the Court of Justice of the EU, Maciej Szpunar, has advised it.

The opinion, a major coup for the Catalan nationalists which will infuriate Madrid, is likely to be upheld by the court when it rules, and should see Oriol Junqueras , former vice-president of the autonomous government of Catalonia, ordered freed to exercise his parliamentary immunity as an MEP.

Mr Junqueras was voted into the European Parliament in May despite being detained in Spain since 2017 after an illegal independence referendum. He was sentenced to 13 years in prison in October for secessionist activities.

Under Spanish law an elected parliamentarian is not deemed such until he/she has attended parliament to swear an oath to uphold the Spanish constitution. From jail he was unable to do so, and the Spanish electoral authorities notified the European Parliament of the elections of only those who had sworn in. The parliament refused to recognise him as an MEP.

The opinion is also likely to affect the cases of exiled Catalan leaders Carles Puigdemont, and Toni Comin, who are living in Belgium and who are also being denied access to the parliament because they have not been in Spain to swear the oath.

Mr Szpunar argues in his opinion that the status of a European parliamentarian arises with the proper election of a candidate, certified by electoral authorities, and that additional national requirements, like that to swear an oath, could call into question parliament’s independence and the autonomy of the EU’s legal order.

According to Mr Szpunar, the parliamentary mandate is acquired solely from the electorate and may not be conditional on the completion of any subsequent formality.

He argues that, before the opening of the inaugural session of the European Parliament after the elections, the national authorities of the member state in which he/she was elected are required to uphold his/her parliamentary immunity and to refrain from measures which could obstruct a member in taking up his/her duties, and to suspend the measures which are already in force.

The right to waive parliamentary immunity rests with the European Parliament, he says.