ICC to investigate crimes against humanity against Rohingya

Some 740,000 displaced by Myanmar crackdown carried out with ‘genocidal intent’ 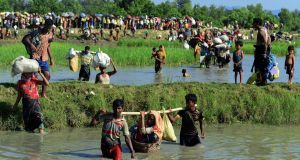 Rohingya refugees carry a woman over a shallow canal after crossing the Naf River as they flee violence in Myanmar to reach Bangladesh in Palongkhali near Ukhia in October 2017. Photograph: Munir Uz Zaman/AFP via Getty

The International Criminal Court (ICC) is to investigate allegations of crimes against humanity by Myanmar against its Rohingya Muslim minority, who were systematically driven out of their homes and across the border into Bangladesh in 2017.

The ICC decision comes at the end of a week during which Gambia – acting on behalf of the 57-state Organisation of Islamic Co-operation – filed a separate suit for genocide against Myanmar at the UN’s top court, the International Court of Justice, also based in The Hague.

At the same time, Aung San Suu Kyi, Myanmar’s state counsellor or prime minister, was named in another case alleging crimes against the Rohingya filed in Argentina under the principle of “universal jurisdiction” – the first time the Nobel laureate has been personally targeted over the controversy.

In a statement, the ICC said that while Myanmar was not a signatory to the Rome Statute which set up the court, it was taking its jurisdiction to open the investigation from the fact that Bangladesh, where some 740,000 Rohingya are now refugees, became a signatory in 2010.

The ICC said its prosecutors had been granted permission to examine acts that could qualify as “widespread or systematic crimes” against the Rohingya, including deportation – which is categorised as a crime against humanity – and persecution on grounds of ethnicity or religion.

It’s understood the team from the ICC – the world’s only permanent war crimes court – will not be seeking evidence to support a charge of genocide. Unusually, however, judges have given chief prosecutor, Fatou Bensouda, authority to look into crimes beyond the scope of her original request.

The investigators will be looking for evidence which sheds light on accusations of systematic killing, gang rape and arson by Myanmar’s security forces – accusations that have previously been rejected by the Myanmar government, which has not yet commented on the new ICC investigation.

Myanmar – which has a majority Buddhist population – most recently dismissed a United Nations report, published in September, which said the country’s military officers carried out their campaign against the Rohingya “with genocidal intent” and should stand trial.

The Rohingya investigation will be the first by the ICC in Asia and has been welcomed by human rights organisations and by Rohingya leaders.

“I hope this investigation will achieve justice because genocide will certainly happen again if no action is taken this time against the Myanmar government and its army,” said Rohingya community leader, Dil Mohammed.