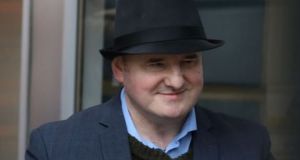 Robbie Sinnott from the Blind Legal Alliance said: “Large sections of both streets will be used by taxis 24-7, and cyclists will have free reign. So, curbs and dished crossings need to be provided for vulnerable pedestrians.” File Photograph: Collins Courts

Organisations representing visually impaired people and wheelchair users have urged Dublin City Council not to go ahead with planned upgrades of streets close to the Pro Cathedral and O’Connell Street.

The upgrade would involve the removal and replacement of the existing asphalt and concrete road surfaces with a paved granite surface, to include loading bays, disabled parking and taxi ranks. New “street furniture” – benches and bollards – tree planting, seasonal planting containers and seating would also be installed.

As part of the resurfacing the council wants to remove the existing kerbs and bring the footpaths to the same height as the roadway, providing a “level surface” similar to the pedestrian streets of Henry Street and Grafton Street.

However, Sackville Place and Cathedral Street will remain vehicular streets, with taxi ranks, and the new surface will make them unsafe for visually impaired people, Robbie Sinnott of the Blind Legal Alliance said.

“Large sections of both streets will be used by taxis 24-7, and cyclists will have free reign. So, curbs and dished crossings need to be provided for vulnerable pedestrians.”

Guide dogs are trained to stop at kerbs of a minimum height of 60mm he said. The granite surface also posed difficulties for people with disabilities, including elderly people who might be visiting the cathedral.

“Compared to the current concrete and asphalt, granite is much slippier in wet conditions especially. This is likely to lead to slips and falls by vulnerable pedestrians in particular,” he said.

Wheelchair users also raised concerns with the council about the lack of definition between the path and the roadway.

Both streets were experiencing increased footfall since the introduction of the Luas to Marlborough Street but were “in very poor condition”, the council said.

It said it had taken the submissions from disability groups into consideration, and all materials used will comply with “minimum design requirements for slip resistance”. It said “drainage channels” would also be used to demarcate the footpath from the road.

“It is accepted that the absence of a height delineation can result in confusion and disorientation and in this regard differentiation in the colour of the paving can be considered,” it said.

Changing the colour of the paving would not be much help to visually impaired people, Mr Sinnott said.

Councillors will be asked to approve the plans on Monday and Mr Sinnott is asking they vote against the plans.

“We are absolutely for improvements, but never at the expense of vulnerable pedestrians. We expect that all right-thinking people would agree.”

Mr Sinnott last year won a High Court case over the State’s duty to vindicate his right to vote privately and without assistance in referendums and elections. Tactile ballots will be used for the first time in the upcoming referendum on the Eighth Amendment.

Covid-19: Further 939 cases and three deaths reported in State 18:07
Cattle egret pays rare visit to Ireland 17:56
Protest at Áras an Uachtaráin over mother and baby homes Bill 17:46
Water on moon may be more common than previously thought 16:53
Pledge to ramp up processing of applications from undocumented migrants 16:20