Thousands gather for ‘Love Both’ rally in Dublin 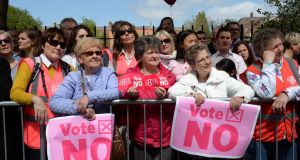 A section of the crowd attending the Love Both rally in Merrion Square, Dublin. Photograph: Dara Mac Dónaill/The Irish Times

Several thousand people turned out in Dublin on Saturday afternoon for a rally by the Love Both group opposing the repeal of the Eighth Amendment in the referendum on May 25th.

Eileen O’ Riordan, the mother of the late Cranberries singer Dolores O’ Riordan, told the event that her daughter was completely opposed to abortion. “All our family will be voting no on the 25th of May.”

A number of anti-abortion members of the Oireachtas were also brought on stage, although they were not invited to speak. They included Sinn Féin TD Peadar Tóibín, Fine Gael TD Peter Fitzpatrick and Independent Senator Rónán Mullen.

Dr O’Regan, a GP based in Kerry and a member of the Medical Alliance for the Eighth, said he had heard a “litany of falsehoods and exaggerations” which he claimed was “designed to create a climate of panic, to distract from the reality of repeal, which is unrestricted abortion on demand”.

Bernadette Goulding, co-founder of womenhurt.ie, a support group for women who have had abortions and regretted that decision, spoke of her shame at her own abortion, said she had noted the different pro-repeal signs on her way to the event.

“And it really saddened me to see the signs there like ‘compassion’, ‘women’s health’, “shaming”. They don’t know the meaning of the word shaming,” she said.

Ms Goulding said she felt “compassion for those women who are behind the Repeal movement because they have been fed all the lies of abortion”.

To cheers, student Gavin Boyne (20) said he wanted to express his thanks to those in the crowd who had campaigned for the insertion of the amendment into the constitution in 1983.

“Without your efforts, not only would the Eighth Amendment not exist, but I would not be here today.”

Mr Boyne said he spoke “on behalf of all of those Irish men and women who are alive today because of your efforts, your efforts to make Ireland a better and a more inclusive society where respect for one another starts in the womb”.

He said his mother had given birth to him at the age of 16 but several months before she had gone to England to have an abortion.

Mr Boyne said Dr Peter Boylan, a former master of the National Maternity Hospital who is in favour of repealing the amendment, had “personally attacked” every person who was alive as a result of the amendment by describing it as a “failed experiment”.

Ms Sherlock asked those at the rally to “give it everything we’ve got” for the next fortnight “to protect our Eighth Amendment”.

She claimed a vote for repealing it was “a vote for one of the deadliest abortion laws ever proposed”.

Ms Simons said the Pro-Life Campaign and other such groups had “one goal and one goal only”.

“That is to protect in our laws all life from conception to natural death – no exceptions.”

She claimed the Government’s proposal would “result in abortion on demand”.

Thanking those in the crowd, she said that to win and to keep the Eighth Amendment, people had to “go the extra mile” and put the word out to their friends and family and the people they had been putting off talking to.

“To our friends who we know are pro-choice, we have to show them we are nice people. You are all my friends, we are the kind of people people want to be friends with. We are not unreasonable. We are caring. We love each other and we want to love women with unplanned pregnancies.”

In the Dáil on March 9th, Minister for Health Simon Harris said the law as it stands “permits termination only in situations where a woman will otherwise die”.

Mr Harris said that contrary to “some assertions which are being made, such provisions would not make Ireland an outlier internationally”.

“But I accept they represent a quantum leap from our position on the spectrum today where we have one of the most restrictive regimes. The proposed legislation is not without restriction.”