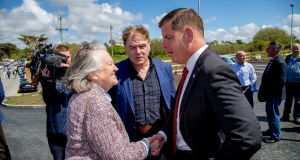 The issue of the 13 million undocumented living in the United States was not just about Irish nationals and if the problem is to be fixed it must address other nationalities as well, the Mayor of Boston Marty Walsh has said.

Mr Walsh was in Galway on Saturday to open a new Emigrants Commemorative Centre in the Connemara Gaeltacht where his parents emigrated from to Boston.

Speaking to The Irish Times at the event in Carna, Mr Walsh said: “Emigration in America needs to be addressed. We have 13 million undocumented people there. A good percentage of those are Irish. But if we are going to fix it, it just can’t be for the Irish. It has to be for the Italians and those from central America. . . it has to be a universal, across the board, fix.

“I don’t think the current Congress is capable of doing that but when we get a new Congress they will be able to make it a priority. . . and get some legislation passed.”

He said emigration was a worldwide issue where many countries were suffering a brain drain. During his urged young people to think hard about leaving their native country.

Speaking to a crowd of several hundred people he advised young people to pursue education and if they did opt to emigrate, to use what they learned to strengthen their own community at home.

Mr Walsh received the Freedom of Galway City on Friday night and will be the first recipient of the Freedom of Co Galway when the local authority honours him on Monday.

He said the idea for the Emigration Centre was first mooted in his own parents’ kitchen in Boston ten years ago by a Carna man, Máirtin Ó Catháin.

He turned the sod of the centre four years ago in the company of former taoiseach Liam Cosgrave who went to school in Carna and visited often.

On Saturday at the opening Cosgrave was warmly remembered and represented by his daughter Mary.

Mr Walsh described himself as “a proud son of Connemara” to be cutting the ribbon of a centre that recognised the struggles of those who had emigrated, many of whom shaped Boston and London and the other places they went.

Mr Walsh is a recovering alcoholic who followed his father into the construction industry and became active in the labourers’ union before getting elected as a State representative.

Many from the Connemara Gaeltacht travelled to Boston in 2013 when he announced he was going to run for Mayor which is why Galway considers him one of their own.

The Carna centre was built on the site of a derelict public hall and will be a gathering point for emigrants and local people with an emphasis on genealogy.