‘The HSE took a gamble with my wife’s life’ 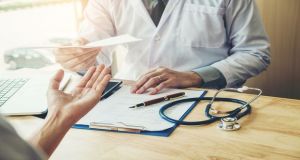 “She fought a tremendous battle...She was putting up one hell of a fight for her life.” File photograph: Getty Images

A man whose wife died from cervical cancer in 2011 two years after receiving an all clear on her cervical smear test has said he expects more “devastating news” and “horrific stories” around mistaken test results will emerge in the coming weeks and month.

John*, a father-of-five from Kildare, was called into Tallaght hospital last week to discuss the results of his wife’s smear test from 2009. He was told the test, which was reported as clear at the time, did in fact have abnormalities.

His wife had undergone a procedure to remove cervical tissue for examination and to treat some precancerous changes of the cervix in 2007 at Portlaoise hospital after a previous smear test revealed abnormalities. The couple were told four weeks later that the procedure had successfully removed all precancerous cells.

In August 2008 John’s wife gave birth to their fifth child, a healthy baby boy. Six months later she had a post-pregnancy smear test which was reported as clear. In May 2009 the family went on holiday to the resort town of Salou in north-eastern Spain. However, two days into the holiday John’s wife began to haemorrhage.

“She was bleeding quite a lot, she knew it wasn’t a period, she just kept saying to me it can’t be anything bad because I’ve got the all clear from the smear test in February,” John told RTÉ’s Today with Sean O’Rourke programme.

She visited her GP as soon as they returned home and was put on a waiting list for a colposcopy at Portlaoise hospital. “We were waiting six months for her to get checked and during that period she haemorrhaged so bad one night that she was admitted to hospital. She collapsed unconscious she’d lost that much blood. She was dismissed from the hospital the next day once her haemoglobin had come up to normal.”

Her gynaecological nurse contacted Portlaoise hospital and was told the hospital no longer carried out colposcopy, said John. The couple were sent to Tallaght hospital and on December 16th, 2009 John’s wife was told she had a tumour. The gynaecologist said treatment would begin in January and referred her to a consultant in St James’s Hospital.

“She didn’t start the treatment until March 2010 so even though she saw the consultant in January 2010 we were waiting eight weeks to start,” said John. “She just gradually got worse, she fought a tremendous battle, she was in constant pain, never stopped bleeding. The weight just fell off her. She was putting up one hell of a fight for her life.”

As she deteriorated, John struggled to explain to their children that their mother was dying. Their youngest was only two years old when his mother died 16 months after her diagnosis in 2011. “He doesn’t remember her because he was only two when she passed. Now on mother’s day in school when all the kids are making mother’s day cards he makes one for me.”

John says the news that his wife’s 2009 cervical smear test results were incorrect “has reopened all sorts of old wounds”.

“I feel like the HSE took a gamble with my wife’s life. They didn’t lose anything and we lost everything. I feel tremendously sad for my children, I feel anger and I have a constant sense of feeling robbed.”

He added: “I honestly think that that incompetent man [HSE director general] Tony O’Brien should be removed from his job immediately. I think there’s going to be more devastating news as the month and the rest of the year goes on. There’s some horrific stories going to come out and there’s going to be lives lost.”