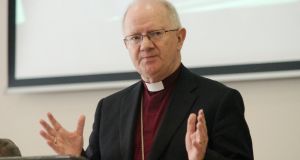 Archbishop Richard Clarke said that “as the Archbishops of today we are entitled to come to a judgment”. Photograph: LiamMcArdle.com

The Church of Ireland Archbishops have repeated their opposition to proposed unrestricted access to abortion in the first 12 weeks of pregnancy should the Eighth Amendment to the Constitution be repealed on May 25th.

Speaking at the church’s General Synod in Armagh, the Primate Archbishop Richard Clarke said he found the proposal “ethically unsustainable”.

He said “if outcome B will happen as a result of action A, and you find that outcome B is something that is ethically undesirable you therefore cannot separate action A from outcome B”.

Archbishop of Dublin Michael Jackson spoke about his “anxiety” over the proposal.

Asked by reporters about the claim of previous Archbishop of Dublin John Neill that, in holding this view, both Archbishops Clarke and Jackson were breaking with a long-held Church of Ireland stance that issues such as abortion should not be dealt with in the Constitution, Archbishop Jackson said “as we looked at the conflation of Constitution and legislation we felt the situation had changed”.

Archbishop Neill, he said, was “entitled to his opinion” but that “we, having considered it, came up with the position we came up with”.

Archbishop Clarke added that “as the Archbishops of today we are entitled to come to a judgment”.

The 12-week clause “has now been conflated with the constitutional change. Had it not been, I think we would be in a different place. But it has been,” he said.

On Brexit, Archbishop Jackson felt a “sense of bereavement”. As someone who had been bishop of the cross-Border Clogher diocese for a decade he said, however, he sensed “that there is will to do the least worst Brexit”.

Archbishop Clarke said “we’re going to have to live with it”. He added: “The prayer has got to be that whatever way Brexit affects Ireland, it will not do damage to what are actually at present relationships between North and the south of the island which are really relaxed.”

On restoration of the institutions at Stormont, he said: “Everybody, it seems to me, is crying out for it.” He asked, “Why on earth can there not be sufficient language used that can actually breakthrough and get the institutions up and running?”

In his presidential address to the General Synod Archbishop Clarke said the Church of Ireland must be a place not only where people may be safe, but also where they may find safety.

“We know that for many people on this island, the idea of the church claiming to be a place of safety seems risible and contemptible. We must ensure that such contempt can never be justifiable in the future. It is not only a matter of our reputation in the eyes of society. It is an unequivocal demand of the Kingdom of God,” he said.

The civil authorities in both Northern Ireland and the Republic “rightly demand very high standards of compliance in safeguarding young people, and we seek to mirror this in our safeguarding of children. From this General Synod onwards, there will also be a code underpinned in church law, again fully compliant with civil law.”

This was “not an option, it is an imperative,” he said.

The church was facing challenges “in ensuring rigorous compliance, not only with our safeguarding protocols but also with other requirements of the civil authorities, in the areas of charities law and also of data recording and protection. I know very well that for clergy, in every part of the Church of Ireland, this is now a matter for real stress.”

He pleaded for members of the laity who had talent in such areas to assist in this matter as such was “extremely necessary at present”.