Relatives from top 10 countries, including Syria and Afghanistan, are eligible 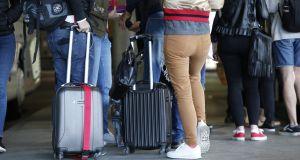 Priority will be given to people who are able to provide accommodation for their family members given the high demand on limited housing supplies across Ireland. Photographer: Michaela Rehle/Bloomberg

A family reunification programme that will allow up to 530 refugees join family members in Ireland will open for applications on Monday.

The Humanitarian Admission Programme 2 (IHAP) will allow Irish citizens of foreign birth, programme refugees and beneficiaries of international protection (those with refugee status) to apply for immediate family members to join them.

People from Syria, Afghanistan, South Sudan, Somalia, Sudan, the Democratic Republic of Congo, Central African Republic, Eritrea and Burundi (the top 10 major source countries for refugees as listed by the UN Refugee Agency) will be entitled to apply for family reunification under the scheme which opens on May 14th.

The nomination process will remain open for six weeks until June 20th, 2018. The introduction of the scheme comes four years after the State’s 2014 Syrian Humanitarian Admission Programme which enabled Syrians already living in Ireland to sponsor vulnerable family members to join them.

It also follows the introduction of the 2015 International Protection Act which restricted family reunification applications to spouses and children under 18. The introduction of the IHAP scheme will allow a limited number of people to apply for family members such as siblings and elderly parents to join them in Ireland.

Priority will be given to people who are able to provide accommodation for their family members given the high demand on limited housing supplies across Ireland.

Work is also under way to pilot a community sponsorship scheme which will allow communities across Ireland to directly support and provide a safe haven to people fleeing conflict and persecution, the Department of Justice has said.

Minister of State with special responsibility for Equality, Immigration and Integration David Stanton welcomed the introduction of IHAP as a “humane and flexible response to the needs of those fleeing high-risk areas”.

He noted that persons admitted under the scheme would be part of the Irish Refugee Protection Programme which was introduced in 2015 in response to the refugee crisis.

They will be entitled to “status in their own right rather than a dependency status on their family member,” said Mr Stanton. “This is important for their long-term integration and sense of belonging in our communities.”

Minister for Justice Charlie Flanagan said the programme would give people already in Ireland the opportunity to bring family members affected by mass displacement to Ireland. “I know this programme will help change many lives and I am very pleased to be in a position to open the call for proposals,” he said.

In 2015 the Government committed to welcoming 4,000 refugees and asylum seekers from Greece, Lebanon and Italy as part of the Irish Refugee Protection Programme. To date, 1,814 refugees have arrived in Ireland under the resettlement and relocation strands of the programme.