Tributes to Michael Stokes (15) who featured on ‘Room To Improve’ 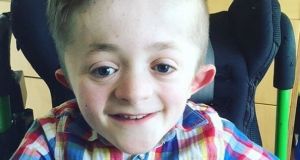 Michael Stokes who died on Saturday.

Tributes have been paid to a teenage boy who featured on RTÉ’s Room To Improve following his death in a fall.

The teenager, who spent years in care, was fostered by his teacher Ann Higgins and her husband Barry.

Architect Dermot Bannon went to their home in Malahide in 2016 to make it wheelchair accessible and suitable for Michael’s needs.

In an Instagram post, he said it had been a privilege to know “this amazing young man”.

1/2 The CRC is devastated to hear of the passing of one our students Michael Stokes, he was a ray of sunshine and much loved by everyone https://t.co/CAGuMhCivl

Michael appeared on the Late Late Show earlier this year and spoke about being fostered and his delight at his new home.

On that programme Michael said: “I knew Ann because she was my teacher and I met Barry at my communion party. I have my own bed, I have my own desk. I love everything, everything is at my level.”

“[Michael Stokes] was a treasure to all who knew him in St Michaels House. Sincere sympathies to his loving family from our board, staff and all his friends.”

A statement from the Central Remedial Clinic read: “The CRC is devastated to hear of the passing of one our students Michael Stokes, he was a ray of sunshine and much loved by everyone, especially all his classmates. We extend our deepest sympathies to Ann & Barry and all his friends and family.

Michael’s removal will take place on Wednesday at the Church of the Sacred Heart, Seabury, Malahide arriving for a Funeral Mass at 10 am, followed by burial in Dardistown Cemetery.

His family asked for donations, if desired, to be given to Temple Street Children’s Hospital.