An image of God the father 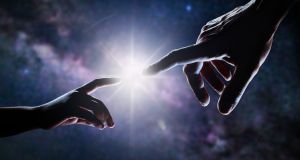 ‘Any image that inspires goodness, integrity and wholesomeness can form an appropriate image of God.’ Photograph: Getty Images

No one has ever seen God. St Paul tells us that. Nonetheless we have developed and promoted an image of God with which every person is surely familiar. God is an elderly man with a full white beard who usually wears white.

In the Book of Genesis we are told that God created us in his own image and likeness. We have dutifully returned the compliment ever since and formed God back into our own image and likeness. As Jesus himself used the fatherly analogy we have, as Christians, felt duty bound to adhere rigidly to that image. God the Father has consequently ended up as an elderly man with a beard; an image of fatherhood that very few of us can even visibly identify with before our 50th birthday.

The father-figure, God is never presented as the dad getting up to do a midnight feed, wheeling a buggy or standing on the side-line cheering his offspring on. Instead we tend to restrict ourselves to an image modelled on a king sitting in opulent splendour. Kings paid artists and the old-man image dominates western art as a result. It is a dominance that has also limited theological imagination. This is unfortunate for many. As easily as the old man can be a kindly person he can just as easily be a judgmental, cold and distant figure. All images have the potential to alienate a person; some faiths discourage images for that reason.

Any image that inspires goodness, integrity and wholesomeness can form an appropriate image of God. As long as you do not come to believe that the image is God, you cannot go wrong with this. The father image is good as long as its principal focus is the dad at the playground railings who might occasionally have to call his child to order. It can be an image of God that blesses the natural love, concern and protectiveness that we see as natural to parenthood. That is a wonderful image even if it is gender specific. Mothers at the playground railings exhibit the same qualities. Mother is certainly a suitable image for the God who bore the universe into being.

We should not be shy of finding new ways of describing why some of still believe in God. Time moves on. Our knowledge and science increase. Social conventions change. Within all that change, faith communities are generally perceived as some sort of guardians of traditional values.

Sometimes we live up to that too much and fail to engage with the world around us. God the lover, God the best friend, God the charity volunteer, God the elderly lady holding her husband’s hand in the hospital silence – wherever there is love, God is there. That’s our real tradition value; a value that always needs new expression.

Vocabulary, songs and the plots of soaps struggle to find ways of describing a life that is constantly changing. The challenge for faith is no different. Even though it is still most people’s choice: a cup of instant is no longer enough to describe coffee.

Our instant image of God as father can only gain from a choice of alternatives in we want to speak faith. None of us has ever seen God. St Paul is still right. Anywhere we find love we can also find a new way of describing our experience of a God we have never seen.