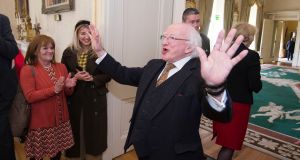 President Michael D Higgins hosts an event at Áras an Uachtaráin on Friday for the Christine Buckley Centre, an organisation set up to assist the victims of clerical and institutional abuse. Photograph: Dave Meehan for the Irish Times

Society and those who “stayed silent” also bear responsibility for what took place in industrial schools and other historic institutions, President Michael D Higgins has said.

President Higgins said it is “critical” that the State and society continue to face the “mistakes of the past” and examine the treatment of vulnerable citizens.

Mr Higgins was speaking at Áras an Uachtaráin on Friday, where he hosted an event for members of the Christine Buckley Centre, which was set up to assist victims of institutional abuse.

The event marked the 10th anniversary of the Ryan Report, which concluded nine years of investigation by the Commission of Inquiry into Child Abuse by Mr Justice Seán Ryan.

“It must be recognised as well that it wasn’t only those who were administering institutions but those who were in society and stayed silent bear the responsibility for what took place,” Mr Higgins said.

President Higgins said there was a “long wait” for the apology which came from former taoiseach Bertie Ahern in May 1999, who apologised on behalf of the State and its citizens to the victims of child abuse.

“The apology was a moment when at last we spoke as one voice in validation of the pain and heartache that was inflicted on so many of our young people . . . a moment that ensured your experiences would be stitched into the common memory of the nation,” Mr Higgins said.

The President said it is from the stories of survivors that “great wisdom” can be drawn, “including the realisation of the great hurt that can be done when we do not remain vigilant, when we do not have the courage to question the status quo”.

“Through your stories and the stories of other vulnerable people who had been entrusted to the care of State and who were instead mistreated, Irish society was enabled and forced to look at itself unflinchingly, to see clearly the flawed premises on which it was constructed, the faults and weaknesses which had led to such a shameful lack of shared humanity,” he added.

Mr Higgins said while progress has been made in the decade since the publication of the Ryan Report, it is imperative that the State remains vigilant “in fulfilling its obligation to protect all of our citizens”.

Carmel McDonnell Byrne, survivor and co-founder of the Christine Buckley Centre said she was touched by the empathy shown by President Higgins.

“To be here today, I was honoured to hear the President he was so passionate and there is huge empathy there,” she said.

“I think for people to hear from the President of their country, the shame, and that society had such a big hand to play in this, I think it’s huge.”

Doctors ‘shooting themselves in foot’, Varadkar texted Ó Tuathail 10:07
Greens welcome Cork City Council pledge to examine idea of eco graveyard for city 09:12
Family of Irish man held in China: ‘Nobody is helping us – we are just begging for help’ 06:00
Covid-19: Is Christmas really the problem? 02:11
Brexit talks stall after tense week of negotiations 01:22