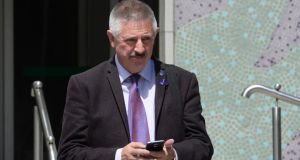 Fórsa national secretary Peter Nolan: ‘The injustice highlighted was an important one that goes to the heart of equality in employment.’ File photograph: Dara Mac Dónaill

Local authority staff have backed calls for a ballot on industrial action if progress is not made in the near future on a five per cent pay rise which has been outstanding for more than a decade.

The Fórsa local government conference in Kilkenny heard that the public service benchmarking body had recommended a five per cent award for senior executive officers in local authorities in 2007 but it remained unpaid.

Fórsa’s Wexford local government branch said that the increase was considered an “outstanding adjudication” under the current public service agreement.

The conference passed a motion that in the event that this five per cent increase was not made before June 1st, 2019, the union would ballot members for industrial action in support of the payment of this award.

However, he cautioned that he wanted to consult senior executive officers about the proposal to ballot for industrial action.

He said that senior executive officers were the third highest grade in local authorities after chief executives and directors of services.

He said there were about 200 across the country.

He said: “The injustice highlighted [by the conference motion] was an important one that goes to the heart of equality in employment.

“The background to this is that local government made senior executive officers interchangeable with their engineering colleagues who enjoy a premium in pay over them.

“That is not fair to administrative staff who want to aspire to the highest grade and it is important we win it.”

He said there was no hesitation on the part of the division’s executive in committing to a direction of industrial action.

However, he said it was important to have the absolute, unqualified support of the union’s national group of senior executive officers.