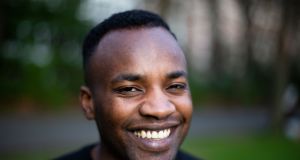 Ismail Ahmed joined 60 young people from across Europe in Romania on Thursday ahead of a European Council summit to discuss the role of children in decision-making at an EU-level. File photograph: Tom Honan

A 19-year-old who came to Ireland from Calais as an unaccompanied migrant two years ago has called on European leaders to pay greater attention to the needs of children when making decisions about the future of the union.

Ismail Ahmed joined 60 young people from across Europe in Romania on Thursday ahead of a European Council summit to discuss the role of children in decision-making at an EU-level.

Mr Ahmed, a fifth year student living in Dublin, described his solo journey as a teenager from Sudan to Calais in northern France via Libya and the Mediterranean to nearly 200 attendees at the EU Children’ conference in Bucharest, warning that countless children’s voices across Europe were being “silenced”.

“Just because you are a refugee or a migrant does not mean that you are not a child. We came to Europe because we have no choice.

“We were forced to leave our homes. It is important for children not only to be listened to at a European level but also within our communities. We need to feel like we belong.”

Mr Ahmed said sharing his story at Thursday’s conference helped “to lessen the pain” of what he has been through. Speaking to the Irish Times New to the Parish series earlier this year, he described the two months he spent sleeping rough in the Porte de la Chapelle district of Paris.

“It was very bad because you’re sleeping under a bridge, you’re homeless. It was winter and there was a lot of rain during the night. People would be fighting, it was really dangerous. There were so many people there.”

“I had no money for something to eat or drink and nowhere to sleep. I saw a lot of people in the same situation as me. It was unbelievable but when you see it with your eyes you will believe it.”

In August 2017, Mr Ahmed arrived in Ireland after the Government committed to bringing up to 200 unaccompanied minors from the Calais. A total of 41 young people were ultimately brought to Ireland under the programme.

This week’s conference in Romania saw students join more than a hundred child rights experts and European high-level officials for the publication of the ‘Bucharest EU Children’s Declaration’ which was written by young people and will be presented to European heads of state, including Leo Varadkar, at the European Council summit being held in the city of Sibiu, also in Romania.

Lucy Warmington (17) from Tipperary, who joined Mr Ahmed in representing Ireland as a UNICEF youth advocate at the conference, reminded leaders of their responsibility to build a safe and sustainable world for future generations. “We are the generation who will continue to live in this world created by our predecessors. Yet we are the generation without the power in government offices to sign legislation. Without the power to make the big changes that are necessary if we want to turn our global emissions to a downward curve.

“There is an urgent need for serious action from governments concerning climate change, and it is up to us, the children, to persuade them to make this their top priority, and the forefront of every decision they make. And they must remember to include us along the way, not only because we are the future, but because we are the present as well, and now is the time for change.”