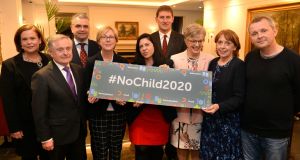 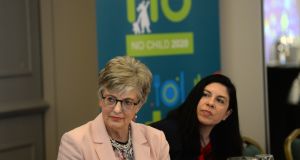 A three-year plan to eradicate consistent poverty among children, led by the Taoiseach Leo Varadkar, is necessary if the issue is to be taken seriously, a landmark political gathering has heard.

The event, hosted by the Children’s Rights Alliance, was the first time in several years that all political parties sent representatives to affirm their commitment to tackling child poverty.

Those present heard that 107,000 children were living in deep, consistent poverty in the State. This means they live in households with incomes below 60 per cent of the median and also experience two or more deprivations, such as not having a warm winter coat or a warm home.

Opening the event, Minister for Children Katherine Zapppone said child poverty must be tackled from “the heart of Government” which involved every Minister and department.

“Each should be tasked with identifying the actions being taken, and how their impact will be measured. We have seen such an approach work when our nation faces enormous challenges,” she said.

“The cross-Government response to Brexit has given us a model which can be used to respond to other matters of urgency. Child poverty is such a challenge.”

All those participating agreed with the Children’s Rights Alliance’s call for a national strategy, with targets and time frames for all Government departments, similar to the 2012 National Action Plan for Jobs aimed then at tackling high unemployment.

Children’s Rights Alliance chief executive Tanya Ward said despite some measures being introduced to tackle child poverty, the reality was that it remained a profound and urgent issue for too many children.

“If we are serious about ending it we must take action now by appointing a national director to lead a child poverty unit within Government,” she said.

Ms Doherty, who is involved in an initiative to provide free hot school-meals to every primary school child by September of next year, said ending child poverty was not just about increasing social-welfare rates. There was a need also to “change culture” in some of the poorest communities where, for example, some parents hadn’t “been handed down” the skill sets to cook healthy food, she said.

Ms McDonald said a culture change was needed in a society where lone-parents had been “devastated during the austerity years”.

“A cultural shift has to happen in our society where child poverty becomes unacceptable and where wealth does not accumulate to one section of society while another section, in plain sight, is being left behind.”

Mr Boyd Barrett was pessimistic about child poverty being tackled as long as “profound inequality” was allowed to continue and a “two-tier” approach to the provision of health services and education remained “so deeply entrenched”.

All except Ms Doherty committed their parties to holding a referendum guaranteeing a right to housing if returned to government.

Ms Doherty had “no doubt” a referendum would be passed but said it would be pointless without sufficient housing.

Ms Shortall said “in many ways” it was more urgent to amend the Constitution to address land-hoarding and better protect tenants in the private sector.

Mr Howlin called for “urgent legislation” to implement the 1973 Kenny report, which sought to allow the compulsory purchase of agricultural land for housing and associated infrastructure.

Mr Boyd Barrett called for income thresholds for public housing to be abolished alongside a massive public-housing building programme, saying this would address the housing crisis and deliver socially diverse communities.

Mr Calleary described as a “superb idea” a call from Mr Boyd Barrett that Government employ artists across the State to work in schools, delivering “arts and creativity to thousands of children”.

“It would improve their health, education and mental health as well as providing a living wage to artists, many of whom are in very precarious situations,” said Mr Boyd Barrett.