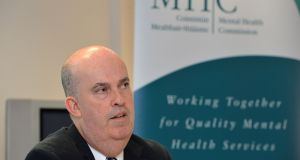 Children were sharing bathrooms with adult patients in an acute psychiatric unit while 20 patients shared one bath and one shower in another facility, the Mental Health Commission has found.

A report by the commission on five centres in counties Clare, Sligo, Tipperary, Cork and Dublin says eight incidents of “critical risk” to patient welfare were detected in addition to 27 “high risk” failings.

It said the 52-bed acute psychiatric unit at Tallaght Hospital, Dublin, “had a high risk on admission of children”.

Many patients there had to wait weeks before individual care plans were drawn up and longer for reviews of their plans, the commission said.

In units two, three, four and eight of St Stephen’s Hospital, close to Glanmire in Cork, the centre was non-compliant on all of its conditions of registration – privacy, premises, staffing and risk management – for the third consecutive year.

Among the aspects of care “of particular concern” were a lack of recreational activities, a lack of access to national screening programmes, no outside space, a lack of adequate physical health monitoring, poor individual plans, one shower and one bath for 20 residents.

The commission said risk management processes were “unco-ordinated”, residents had to “sleep out” of the units when beds were unavailable, physical health checks were inadequate and there was no arrangement for access to speech and language therapy for residents that needed it.

The centre was “not kept in a good state of repair” with worn floor coverings, chairs with cigarette burns, dirty floors and unpleasant smelling bathrooms.

At the 32-bed Sligo-Leitrim in-patient psychiatric unit, on the outskirts of Sligo town, women residents experienced “a gross invasion of privacy” when they required seclusion, as they had to be escorted via the male admission ward.

While there had been “marked improvements” since 2016, assaults by residents on staff were not managed in a way that ensured safety for other residents and staff.

“Incident management forms indicated that there had been two fires in the approved centre since the last inspection [in 2016]. One was where a bin was set alight and in the other a toilet roll was set on fire. Only seven nurses and no medical staff had up-to-date safety training. There was no emergency plan that specified responses by the approved centre staff in relation to possible emergencies and/or evacuation,” says the report.

At a 40-bed unit in Haywood Lodge, Co Tipperary, the commission found “no improvement in compliance with regulations from 2016 to 2018” on issues including recreational activities, general health, premises, staffing and the use of physical restraint.

“No therapeutic programme was available to residents at the time of inspection. The availability of occupational therapy and social work personnel was limited . . . 14 of the 20 residents under the care of the ‘later life’ team did not have access to recreational activities.”

The centre was not clean, the commission said, with “a large partially dried pool of urine and other stains” observed on the floor of one resident’s en suite facility.

At the 39-bed acute psychiatric unit in Ennis hospital, Co Clare “the standard of individual care plans was poor and risk was rated as critical”.

Goals identified for residents were not adequate to meet their needs and responsibility for implementing care and treatment was not always identified.

“There was no evidence that care plans were reviewed by the full multi-disciplinary team . . . Not all care plans inspected identified residents’ assessed needs and goals regarding therapeutic services and programmes,” the report says.