‘Dwindling numbers, increasing age and illness have taken their toll’ 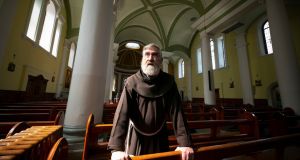 Nearly 800 years ago, Franciscan friars first came to Waterford when they were given land by a local noble, Hugh Purcell, whose family had been loyal lieutenants to Strongbow, Richard de Clare. In return, the friars pledged to pray for his soul daily.

This week, the ties between the Franciscans and Waterford finally ended with the closure of their friary and the departure of the last four remaining friars.

“The Franciscan Province of Ireland, like many other religious institutes, has had to face the reality in the past two decades of having to withdraw their presence from many cherished locations throughout Ireland,” he said in a statement.

Two of the final four friars in Waterford were in their 80s, while the others were in their 70s, including 74-year-old Fr Brian Allen who remembers when there were 360 friars in Ireland. That was when he joined in 1974.

Today, the number stands at a hundred.

Fr Allen, who moved to Waterford five years ago, is being moved to Dublin to the order’s monastery on Merchants Quay, while the others are being sent to Ennis and Westmeath.

Many of the parishioners in Lady’s Lane where they were based have been upset by the departure: “Some feel very angry [and] that’s good because it means we were doing something here. If we were useless then you’d say good riddance, and that adds to my sadness of leaving,” Fr Allen said.

“Some people are depressed. We get a steady flow of people in, just to talk,” he said. “We have to face the realities of the present.”

Eighty per cent of Franciscans are now pensioners, while just eight have joined in the past eight years. “That won’t keep pace with the deaths.”

The Franciscans will continue to be involved in the Lady Lane church from their base in Clonmel “for as long as it can be continued”, while it is hoped that the friary will become the residence of a congregation of nuns.

Fr Allen believes regeneration is possible: “You have to have a community and the circumstances have changed so that we can no longer have a resident community. But that doesn’t mean it’s the end.

“St Francis said we’re pilgrims and strangers. We have no permanent home, we’re passing through. The friars have been here for about 800 years. [Following the Reformation] Henry VIII sent us living down by the river but we came back from that.”

Change would be needed, he said, expressing support for ideas put forward by the neighbouring Bishop of Ossory, Dermot Farrell, who wants to reorganise parishes and bring candidate priests directly into parish life early on.

“I was a printer by trade and did an apprenticeship for seven years. During the apprenticeship you’d do what they’d call ‘block release’, where you’d be released for three months to go to Bolton Street and do the theory.

“That’s the system they used in the church at the time of Oliver Plunkett 400 years ago, that if you wanted to be a priest, you became an apprentice to a priest. It could go back to that situation, where training comes ahead of education,” he said.

Despite the Franciscans’ falling numbers, Fr Allen does not favour the creation of women priests, believing the debate around women taking on a role themselves by becoming priests had become a “power struggle”.

“The church is mainly women and it’s supported by women,” he said. “The character of the church over history has become about power, and women want power. That’s why they’re going into politics, becoming CEOs.”

He contended that a stronger role for women in the church would lead to “love going missing from the home if women are not there. Women have a different mentality, a different nature. Women are loving. Men are not.”

Bidding farewell, Bishop of Waterford and Lismore Alphonsus Cullinane said the contribution made by “the sons of St Francis for almost 800 years” had been “incalculable”, while the friars themselves were “held in great esteem and affection by people all over the city”.