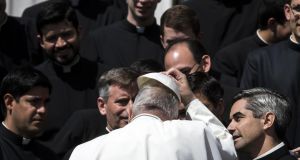 New Catholic Church procedures to hold bishops and religious superiors accountable for their actions in dealing with clerical child sexual abuse have been announced by Pope Francis.

They include an obligation on all Catholic clergy to report abuse to their bishops and/or religious superior and calls on every diocese in the world to set up a system that allows the public to submit reports.

The edict Vos estis lux mundi (You are the light of the world) by Pope Francis was announced at a Vatican press conference on Thursday. It obliges bishops and religious superiors to comply with the civil law of the state in which they reside on reporting clerical child sex abuse. It is already mandatory in Ireland for Catholic Church authorities to report all allegations of child abuse to the civil authorities.

The document establishes universal norms which apply to the Catholic Church worldwide and follows on from the meeting on the Protection of Minors held at the Vatican last February.

It obliges every Catholic diocese to set up, by June 2020, “one or more public, stable and easily accessible systems for submission of reports” concerning sexual abuse committed by clerics and religious, the use of child pornography, and cover-ups of same.

It does not specify what these “systems” should be, allowing for differences which may occur according to local cultures and conditions. However, the imperative is that anyone who has suffered abuse has recourse to the local church, while being assured they will be well received, protected from retaliation, and that their reports will be treated with the utmost seriousness.

The new norms place an obligation on all clergy and all men and women religious, to “report promptly” all accusations of abuse of which they become aware, as well as any omissions and cover-ups in the management of cases of abuse, to ecclesiastical authorities. This now becomes a universally established legal precept within the church.

It also includes reporting not only violence and abuse against children and vulnerable adults, but also sexual abuse and violence resulting from an abuse of authority as well. This includes cases of violence against religious by clerics, as well as abuse committed against adult seminarians or novices.

The new norms lay down regulations for the investigation of bishops, cardinals, religious superiors where they may have committed sexual abuse themselves, but also if they are accused of having “covered up” or of failing to pursue abuses of which they were aware and which it was their duty to address.

The norms also stress the important role of lay professionals in conducting such investigations, the results of which are forwarded to the Vatican which may immediately impose preventive and restrictive measures on the person under investigation.

Pope Francis writes in the document that “in order that these phenomena, in all their forms, never happen again, a continuous and profound conversion of hearts is needed, attested by concrete and effective actions that involve everyone in the Church”.