Understanding Luther can help overcome ‘rivalry between Catholics and Protestants’ 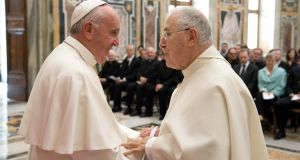 The idea of the Pope opening a conference on Martin Luther at the Vatican might seem like an April Fool’s joke.

But that little bit of ecclesiastical history was made on Friday, much to Pope Francis’s surprise and gratitude.

“Not long ago a meeting like this would have been unthinkable,” he said.

“Catholics and Lutherans together, discussing Luther, at a meeting organised by an Office of the Holy See: truly we are experiencing the results of the working of the Holy Spirit.”

He was speaking to participants at the conference on “Luther: 500 Years Later”, organised by the Vatican’s Committee for Historical Sciences, at the Clementine Hall near St Peter’s Basilica.

It was the sale of indulgences to raise funds for the building of St Peter’s which prompted Luther to write his Ninety-five Theses, nailed to the door of All Saints’ Church in Wittenberg on October 31st 1517, giving rise to what became the Protestant Reformation.

“All of us are well aware that the past cannot be changed. Yet today, after 50 years of ecumenical dialogue between Catholics and Protestants, it is possible to engage in a purification of memory,” Pope Francis said.

“This is not to undertake an impracticable correction of all that happened 500 years ago, but rather ‘to tell that history differently’ free of any lingering trace of the resentment over past injuries that has distorted our view of one another.

“Today, as Christians, all of us are called to put behind us all prejudice towards the faith that others profess with a different emphasis or language, to offer one another forgiveness for the sin committed by those who have gone before us, and together to implore from God the gift of reconciliation and unity.”

Serious research “into the figure of Luther and his critique of the church of his time and the papacy certainly contributes to overcoming the atmosphere of mutual distrust and rivalry that for all too long marked relations between Catholics and Protestants,” the Pope said.

On October 31st last year Pope Francis visited Lund in Sweden for a joint Catholic-Lutheran commemoration of the Reformation. The Lutheran World Federation was founded at Lund in 1947, in an effort to unite churches after World War II.