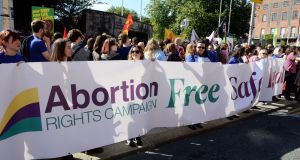 People at the March for Choice organised by the Abortion Rights Campaign , in Dublin city centre in 2015. Photograph: Eric Luke

The Abortion Rights Campaign has returned a grant it received from a US-based foundation following a warning from the Standards in Public Office (Sipo).

The campaign said it returned the grant from the Open Society Foundation established by the billionaire George Soros.

“The grant was received to fund educational and stigma-busting projects,” it said

“We do not agree with SIPO’s advice, but in good faith we returned the grant in order to comply with all regulatory frameworks,”

It was reported in The Irish Catholic that the group gave back the €23,000 after it was contacted by the ethics watchdog.

There are major restrictions under Irish law in using foreign donations for political purposes.

“Many organisations in Ireland apply for and receive international grants. The majority of the Abortion Rights Campaign’s funding comes from voluntary donations from members and supporters. The organisation, which has no paid staff and is run by dedicated volunteers, operates on a small budget,” ARC spokeswoman Linda Kavanagh..