Demonstrators outside the Dail, along with campaigner Joanne O’Riordan, protest against the failure of the government to ratify an international agreement on disability rights. Video: Hugh Linehan 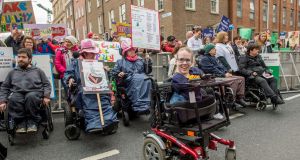 Ireland has been “living a lie” since the marriage equality referendum in 2015 because of its failure to ratify an international agreement on disability rights, demonstrators outside the Dáil were told on Thursday.

Campaigner Joanne O’Riordan was addressing a rally organised by up to 100 disability support groups, including the Irish Wheelchair Association, Down Syndrome Ireland and the Central Remedial Clinic.

The demonstration was held to mark the 10th anniversary of the date on which the Irish government had committed to adopting the United Nations Convention on the Rights of Persons with Disabilities, an international agreement on changing attitudes and approaches to people with disabilities.

Ireland is now the only EU member state where the convention has yet to be ratified. Overall, 163 countries worldwide have ratified it.

“Ten years on, we are forced to plead with the Government to ratify,” said Ms O’Riordan, a third-level student from Cork who was born with Tetra-amelia syndrome and has risen to prominence through her advocacy for disability rights.

“That is 10 years of broken promises, 10 years of hurt and 10 years of waiting for someone to do the right thing. They are stating on an international stage that disability rights do not matter.”

Identical twins Ann and Margaret Kennedy (64), from Co Wicklow, said they had been branded “serial complainers” by the HSE. They were highly critical of Minister for Disabilities Finian McGrath.

“We shouldn’t have to fight for our rights to live in the community,” said Margaret, who said she was given incontinence pads instead of being allocated a care assistant to help her access the toilet. “I have to sit in incontinence pads,” she said. “Finian McGrath is allowing this to happen.”

Ann Kennedy said successive governments had delayed ratification of the convention because of what they believed the cost would be.

“They think it’s going to cost them a fortune,” she said. “But at the end of the day other countries have managed to do what they needed to do after they ratified. What we’re trying to do is get all the policies in place before we ratify it, but that leaves us in a limbo.”

Ms O’Riordan said the convention had the power to unlock the true ability of every person living with a disability in Ireland, but most people were unaware of the positive impact the convention could have.

“I and 600,000 other people living in Ireland with a disability refuse to be pushed to the background. I have hopes, dreams and aspirations like everyone else. I want to be a contributor and to participate in every way.”

She said she was asking Mr McGrath to do the right thing.

“Will you be the person who stops us living in an unequal society?” she asked. “Will you offer the hand of equality or will you be the minister who makes us wait even longer?”