Pope Francis visit to Ireland may be ‘shorter than people expect’ 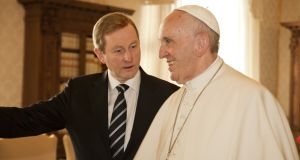 Pope Francis with Taoiseach Enda Kenny during a private audience at the Vatican.

Neither the Catholic Archbishop of Dublin Diarmuid Martin, nor a senior member of the Roman curia was able Thursday to state definitively whether Pope Francis would travel to Ireland for the World Meeting of Families in August next year.

Both men spoke at a Vatican press conference, held to present a letter written by Pope Francis to Cardinal Kevin Farrell, head of the Vatican’s Laity, Family and Life dicastery, relating to the gathering in Ireland.

Asked during the press conference if he could guarantee that Pope Francis would be in Dublin next year, Cardinal Farrell said that the Pope had expressed an “interest” in coming to Dublin, while Dr Martin said the Pope had spoken to him of his “desire” to attend the event.

The meeting runs from August 21st to the 28th.

Cardinal Farrell pointed out, as he has done before, that at this stage nothing in relation to the Pope’s travel programme has yet been decided for next year.

Pope Francis has also been known to change his itinerary at short notice. In announcement which came as a surprise to many, for example, the Holy See announced just ten days ago that Pope Francis would visit Egypt at the end of next month, stopping at the Al-Azhar university and mosque, considered the most important centre of learning in the Sunni Muslim world.

Speaking to The Irish Times Thursday, Dr Martin pointed out that under Pope Francis, apostolic visits had begun to take on a different character. The Archbishop pointed out how last Saturday during a one day visit to Milan, attended by over one million people, Pope Francis had spent the majority of his day with young people and prison detainees rather than with Milan “society”.

Dr Martin added: “If the Pope comes to Ireland, his visit will be shorter than people might expect and he will touch quarters and reach out to people that many might not imagine.”

The Archbishop said the Pope’s visit to Ireland would be the visit of a “Church that reaches out, a church that touches peoples’ lives”, a Church which cares for “families in difficulties”.

When the Pope met Taoiseach Enda Kenny in a Vatican audience last November he indicated he would be in Dublin in August 2018.

Pope Francis also indicated that he would take into consideration a possible extension of the visit, perhaps to Northern Ireland.