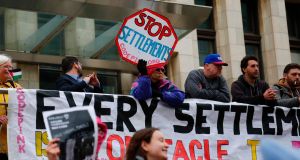 The author of a controversial UN report which accused Israel of operating an apartheid-like regime towards Palestinians is among the speakers due to address a conference in Cork this weekend on the legitimacy of the state of Israel.

Richard Falk, emeritus professor of International Law at Princeton University, co-authored the report with political scientist Virginia Tilley in which they examined the treatment of Palestinians by the Israeli state.

The report which was published by the UN Economic and Social Commission for Western Asia concluded that: “Israel has established an apartheid regime that dominates the Palestinian people as a whole.”

UN under-secretary general and commission executive secretary Rima Khalaf said the report was the “first of its type” from a UN body that “clearly and frankly concludes that Israel is a racist state that has established an apartheid system that persecutes the Palestinian people”.

Meanwhile, Israel has strongly rejected the report, which was published earlier this month, with an Israeli foreign ministry spokesman comparing the document to Der Sturmer – a Nazi propaganda publication that was strongly anti-Semitic.

Prof Falk will defend the report at the three-day conference in Cork.

Among the 40 speakers to address the conference entitled International Law and the State of Israel: Legitimacy, Exceptionalism and Responsibility, will be UK academic and strong supporter of the state of Israel, Prof Geoffrey Alderman of the University of Buckingham.

According to a spokesman for the conference which is being organised by a group of Irish academics, Prof Alderman will give a talk entitled ‘Jews, Judaism and the Jewish State: Ethnic Rights and International Wrongs’.

“Like Prof Falk, Prof Alderman is a non-Israeli Jew and their different perspectives reflect the diversity of opinion among Jews towards Zionism and Israel, a diversity which is not widely reported and which this conference will highlight,” said the spokesman.

The conference, which is open to the public, takes place at Cork City Hall on Friday and Saturday before concluding with further lectures and discussion at University College Cork on Sunday. For further information, visit https://israelpalestinelaw.com