An estimated 30 Irishmen, serving with US forces, were killed in Vietnam war 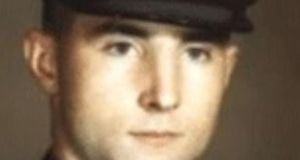 Members of the Defence Forces and the US army will today attend the unveiling of a plaque to honour an Irish man killed in Vietnam.

Corporal Patrick (Bob) Gallagher, a holder of the prestigious Navy Cross, was killed with seven comrades in an ambush by the Viet Cong in Quang Nam Province in March 1967.

From Derintogher, near Ballyhaunis, the US Marine Corps machine-gunner died just 10 days before he had planned a return to Mayo, where celebrations to greet him were already planned.

Minister of State for Defence Paul Kehoe will lay a wreath and unveil the plaque, followed by the opening of an exhibition of memorabilia in the town friary commemorating Gallagher’s life.

Gallagher went to Long Island, New York when he was 18. Drafted into the military, he went to Vietnam in April 1966. Four months later, he saved the lives of three comrades when he threw incoming Viet Cong grenades out of a foxhole.