Galway priest says he believes change, to deal with shortage of priests, will happen 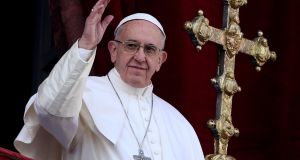 However, the pope has ruled out making celibacy optional to tackle a shortage of clergy.

The shortage has prompted calls from some progressives to end the ancient tradition of celibacy for Roman Catholic priests.

Such a move would represent revolutionary change for the Catholic Church and would likely face massive resistance.

Fr Flannery, who lives in east Co Galway, has fought for change and reform for the Catholic church in Ireland.

He was disciplined and banned from public ministry by the Vatican’s Congregation for the Doctrine of the Faith (CDF) in 2012 for views he expressed on Catholic teachings in areas such as sexuality, contraception and the role of women in the church.

On Saturday, he said the move to allow older men to marry would “have to happen” and he believed it would go ahead.

“Francis is 80 and he’s getting more decisive about moving things forward and this is part of that,” he said.

“The great thing about it is it will be accepted that people can have normal sex life and still be priests and that is such a lovely change.”

“It will also take away this notion that priests are somehow special or more holy.”

Fr Flannery told RTÉ’s Marian Finucane there was a new climate of free speech within the church because of Pope Francis.

“There’s a real sense of excitement and hope within the church,” he said.

Reformers have long suggested that the Vatican could ordain “viri probati” - Latin for men of proven character - who tend to be older, with grown-up families if married.

In an interview with Germany’s Die Zeit newspaper, the pope said this option could be considered.

“We have to give a thought to whether viri probati are a possibility. We then also need to determine which tasks they could take on, such as in isolated areas, for example,” he was quoted as saying.

He ruled out, however, opening the priesthood to all married men or watering down the Catholic Church’s commitment to celibacy, which is seen as a virtue that frees priests to devote their lives fully to serve God.

Prominent Catholics representing both the progressive and conservative wings of the US church voiced support on Friday for the pope’s suggestion, with both camps seeing the move as a practical solution to the chronic shortage of priests.

In Brazil, the nation with more Catholics than any other, the faithful also expressed support for the viri probati idea.

“If he (a priest) had a wife and children, he may have a much fuller experience, which could help those around him,” said Paulo Franca, attending an afternoon Mass at the Santa Luzia Church in Rio de Janeiro.

The church has already sought to address a potential shortage of priests by promoting the use of deacons -- male clerics who can be married and sit just behind priests in the church hierarchy.

They can officiate at baptisms, funerals and weddings, but are not allowed to celebrate Mass, hear confessions or anoint the sick.

The growth in the number of deacons has made US Catholics more comfortable with the idea of married men playing an important role in services, said Bill Donohue, chairman of the conservative-leaning Catholic League.

“My only concern is how this will impact on those priests who are single,” Mr Donohue said in a phone interview.

“You have a lot of funerals on weekends, there are weddings and what not. I can see a situation where a married priest would say, ‘I have to go to my kids’ soccer game, I have responsibilities that you don’t have? They have to think this through a bit more.”

In Buenos Aires, where Pope Francis was formerly archbishop, some locals applauded his more progressive leanings.

“I think Francis is causing a great revolution in the church ... if other religions have it (marriage) why not? Maybe priesthood could even be offered to women,” said Mirta Cortizo.