Bishops speed up preparations to re-open churches for public Masses

Archbishop Diarmuid Martin: ‘We suffer through not being able to celebrate our faith through public worship’ 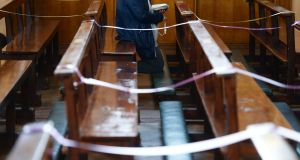 Pandemic restrictions in place on the pews at the Church of Our Lady Help of Christians on Dublin’s Navan Road. Photograph: Alan Betsonimes

Ireland’s Catholic bishops are speeding up preparations to re-open churches for public Masses in case this is allowed to happen sooner than the July 20th date set in the current Government roadmap.

Archbishop of Dublin Diarmuid Martin said on Monday “I realise how we need to move beyond the virtual” while expressing admiration “at the way parishes have been working creatively in reaching out during this complex lockdown situation.”

It was the case that “as Christians, we suffer through not being able to celebrate our faith through public worship,” he said. He said “there is a sense in which this void is especially experienced by priests, who found themselves “unable to carry out to the full what is most essential in their calling.”

As Archbishop he himself experienced “that void in a deep way.” There was “a longing by believers to be able to return to public worship and towards building up Christian communities,” he said.

There was also “a clear recognition by believers and indeed many non-believers alike” that “faith and spiritual experience constitute an important contribution in sustaining people’s personal and mental wellbeing,” he said.

At a meeting of the Irish Bishops’ Conference standing committee on Monday he said they worked on “a shorter and sharper document, with checklists to enable parishes to monitor where they are on the path forward” towards re-opening for services.

The document “ should be available in the next days,” he said.

The current Government roadmap noted “that it will be constantly evaluating progress in reopening society and it is important that we as Church are ready to respond to any change in the current proposed timescale,” he said.

But, the Archbishop advised, “we have to examine how our desires can be measured within the overall public health situation. It is not that we place public health measures above our spiritual mission.”

He reminded parishes of the words of Pope Francis when he greeted the opening of Churches in Italy with the words, “but please, let us proceed respecting the norms, the prescriptions we are given to safeguard the health of each individual and the people.”

In a weekend statement the Association of Catholic Priests (ACP) warned against “ individuals and groups with their own self-serving and self-interested agendas” who were “effectively demanding that churches be kept open, that public Masses be reinstated and that ‘rights’ to pray in churches be upheld.”

In the current context “gathering people together - especially elderly people who are most at risk - is grossly irresponsible,”it said. “Churches or religious groups claiming entitlement to special treatment is inappropriate and unacceptable,” the ACP statement said.

“As Christians, particularly in these difficult days, we need to be selfless rather than selfish, and focussed on the needs of others, (especially the elderly and vulnerable) rather than on our own ‘rights’. At this point in the on-going coronavirus pandemic, moral responsibility trumps our individual rights,” it concluded.

1 Coronavirus: Unwinding of latest stage of roadmap ‘could be pushed back further’
2 Face masks: All you need to know about where, when and why you need one
3 Like ‘a grandfather at the sherry cabinet’: Trump’s meandering monologue
4 UK accuses Russia of election interference and trying to steal Covid-19 vaccine
5 Coronavirus in Ireland: Further reopening delayed amid 'worrying' rise in infection rates
Real news has value SUBSCRIBE

Second ever woman elected to chair of Bar Council 17:16
Garda Commissioner disputes claim of journalistic privilege 17:02
Face masks: All you need to know about where, when and why you need one 16:29
Adrian Donohoe murder accused says he cannot place raiders’ accents 16:26
EU taxation to change, but must be ‘as fair as possible for Ireland’ – Donohoe 16:11