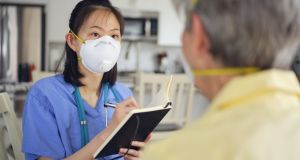 Sage will say that in the absence of a robust testing system it is “most likely that there would have been some transfers of Covid-19 positive patients into nursing homes.” Photograph: iStock

Key State organisations left the nursing home sector and its residents “isolated” in the early days of the coronavirus pandemic, a special Covid-19 committee will be told on Tuesday.

The chief executive of Nursing Homes Ireland Tadhg Daly will tell the Dáil’s committee on the response to Covid-19 that “the dismay will live forever with us.”

“We were exasperated. The sector required a specific plan. We knew that Covid-19 disproportionately impacts on older people. The planning and focus was almost exclusively on our acute hospitals. Multiple clusters initially emerged in our hospitals. But the numbers in nursing homes started to increase.”

Mr Daly is expected to tell the committee that in the absence of a national strategy and response for the nursing home sector, a number of challenges emerged. These included insufficient testing of residents and staff, mass shortfall of PPE and aggressive recruitment of nursing home staff initially by the HSE as well as discharges from acute hospitals to nursing homes without testing.

According to his opening statement, Mr Daly says the National Treatment Purchase Fund, the authority responsible for the commissioning of nursing home care, “fell silent as homes incurred considerable and responsible costs to manage the pandemic. The Department of Health eventually intervened.”

“Key State organisations left the nursing home sector and its residents isolated in those early days. The dismay will live forever with us.”

The committee will also hear from representatives of the Sage advocacy group for vulnerable adults and older people.

According to an opening statement for the group, the initial warning signs regarding a Covid-19 pandemic were generally recognised by private nursing homes.

“However, because of the lack of effective working relationships with the HSE, and the focus at state level on an expected surge and resultant threat to the acute system, the dangers to the most vulnerable who were in nursing homes did not become centre stage until the systemic weaknesses of the outsourced system became clear.”

The group says that “the development of such a significant ‘blind spot’ at statutory level is something that requires considerable reflection.”

The advocacy group will also say that in the absence of a robust testing system it is “most likely that there would have been some transfers of Covid-19 positive patients into nursing homes.”

Furthermore, staff shortages in some cases led to “risk taking with staff in some facilities having to continue to work while ill and in other cases encouraging people back from isolation.”

“Other staff, frightened for their own health and aware of the Covid-19 payments, chose to stay away with the result that some nursing homes were so short staffed that phone calls from extremely concerned and distressed relatives went unanswered; in some cases for days.”

It will say, “staff transfers from the public sector to the private sector were on a voluntary basis, negotiations took up valuable time and delivered little. From the perspective of one person involved, ‘The cavalry never came’.”

Speaking in advance of the hearing, Sinn Féin TD Louise O’Reilly said “the opening statement from Nursing Homes Ireland (NHI) for the Oireachtas Covid19 Committee reveals the failure of the Government and the HSE to put a proper plan in place for nursing homes before they became gripped by the Covid crisis.

“It further points out that planning and the cost of managing the pandemic fell on the shoulders of nursing homes and how the Department of Health only belatedly intervened.

“The whole statement points to a complete failure of the State to enact a structural plan for the nursing home sector, with the necessary financial and staffing resources, until late in the day.”