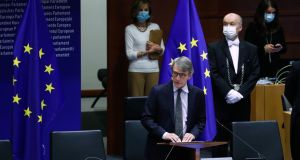 European Parliament president David Sassoli: “Now is not the time for rigid thinking but for reconstruction.” Photograph: Getty Images

The European Parliament will block a recovery fund proposed to help stem the deep economic damage of the coronavirus pandemic unless it is sufficiently “ambitious” and offers grants as well as loans, its president David Sassoli has said.

The warning weighs into a fierce debate between the EU members over how to fund a €500 billion rescue plan to counter a downturn expected to be the worst in a century due to be proposed by the European Commission on Wednesday.

It comes after a group of so-called frugal countries rejected a joint Franco-German call for the issuance of EU debt to the worst-affected countries in the form of grants which would not need to be repaid.

Austria, Denmark, the Netherlands and Sweden insisted that aid should be in the form of loans, and be tied to requirements for budget reforms.

However, loans will not be “enough”, Mr Sassoli told a group of journalists, before calling on the states opposed to grants and common EU debt not to block attempts to rescue the single market because they benefit most from it.

“I appeal to their sense of responsibility,” he said. “There are not frugal countries and free-spending countries. Rather, there are countries aware of the seriousness of the challenges we face and those that are not. That is why I ask everyone to live up to this historic moment.”

“Everyone benefits from the EU single market, and the countries which have raised objections are some of those that have benefited the most. I hope that everyone appreciates this. Now is not the time for rigid thinking but for reconstruction. Otherwise we will end up with a Europe moving at different speeds.”

Approval from both the European Parliament and the EU’s national leaders is required for the adoption of the recovery fund, which is expected to be the subject of fierce debate after the commission’s proposals for it are laid out this week.

The plan must straddle division between calls for a generous fund with few strings attached that could mark an historic step towards closer union in the bloc, and opposition among the frugal group towards greater spending and fiscal integration.

Germany’s shift in the debate away from the frugal side to join France in calling for a €500 billion euro recovery fund in the form of grants has left the group of four isolated.

Even Wolfgang Schäuble, who was a prominent fiscal hawk as German finance minister during the euro zone debt crisis, has calling for the issuance of grants that do not need to be paid back.

“If Europe wants to have any chance at all it must now show solidarity and prove that it is capable to act,” Mr Schäuble told German newspaper Welt am Sonntag. “Germans have an overarching self-interest that Europe gets back on its feet.”

The frugal group has also proposed making access to the recovery fund contingent on following the rule of law amid widespread concerns about erosion of democratic norms and the independence of the judiciary in Hungary and Poland.

The EU’s justice commissioner Vera Jourova promised a European parliamentary committee that she would do everything she could to push for the inclusion of this clause in the recovery fund and the new seven-year EU budget.

“The proposal is on the table,” Ms Jourova said. “I will push on maintaining the rule of law conditionality in a good shape so that it has teeth.”

1 Columbia Sportswear defies gloom with first Irish standalone shop
2 Nine more suing INM and Leslie Buckley over alleged data hacking
3 Restaurants file court actions against insurers over lockdown losses
4 Could your old car be giving away all your secrets to its new owner?
5 Why are markets booming when a crash is on the way?
6 How to further divide the economy using the wage subsidy
7 Supreme Court in Dublin clears Bernie Madoff Ponzi loss case for hearing
8 Brexit: System agreed for Irish goods to skip checks on UK trade
9 Home or car: what’s the best use of my savings?
10 Are you mad to keep your money in prize bonds?
Real news has value SUBSCRIBE