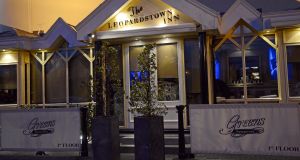 More than a thousand pubs have an interest in a test case that has come before the Commercial Court over whether FBD Insurance should pay for the losses of pubs closed as a result of the coronavirus lockdown, the court has been told.

Four cases, all involving FBD, were entered into the Commercial Court list while other publicans with similar insurance cover wait to see the outcome.

The four cases are being taken by the operators of Sinnotts pub and the Leopardstown Inn in Dublin, Sean’s Bar in Athlone and the Lemon & Duke in Dublin, with a hearing involving the first three listed for October 6th. It is expected to last up to 12 days.

Paul Gallagher SC, for FBD, said there was a public interest in an early hearing, as there were more than a thousand pubs affected and the hearing would be a “test case” that would be of “great significance” for all the parties interested.

Michael Cush SC, for all the applicants other than the operators of Sean’s Bar, said the pubs had insurance in place that raised the issue of the losses triggered by the Covid-19 lockdown and, if such losses were covered, the principles that arose for calculating the damages that were due for recovery.

The case involving the Lemon & Duke is adjourned for two weeks as mediation talks continue. If it is not resolved, it will be added to the October hearing.

Mr Gallagher said the issues to be determined were ones of interpretation, including whether there was “an insured peril”, as well as “causation issues” and the extent of any indemnity.

The issue of what amount might be involved in damages could be left to a later hearing, he said.

In this way a decision on liability could be appealed before any “quantum” had been determined. This approach was the most efficient use of court time, he said.

Mr Justice David Barniville said he was satisfied the cases qualified for entry to the list.

In its submission to the court the Leopardstown Inn said its closure was costing about £56,000 per week, based on weekly turnover of €80,000 and cost of sales of about 30 per cent.

The pub has been availing of the Covid-19 wage subsidy scheme since March 26th to keep as many of its 70 employees as possible on the payroll.

The pub is part of the Loyala Group. Other group companies also in dispute with FBD operate the Bath Pub and the Old Spot, both on Bath Avenue, Dublin 4, the Landmark pub, Dublin, and Bakers Corner, Rochestown Avenue, Dublin.

The value of the cover for consequential loss for the companies is €7.45 million, the court was told.

Sinnotts said it was suffering a financial impact of about €30,253 per week, calculated on the basis of gross sales less VAT.

Other group pubs are making similar claims. These are the Submarine Bar, the Black Lion, the Marble Arch, the Barclay Club, Graingers, Club Lapello, and the Capitol Lounge.

The Lemon & Duke estimated it would have lost €770, 960 by August 10th, when pubs are to reopen. The operator of Sean’s Bar said the total amount insured under its policy was €1.4 million.

1 If tourists are such pariahs should we not be testing them on arrival?
2 ‘My rent here is so low it’s a joke’
3 Belgium helps Ireland to a Brexit boon
4 Can Grafton Street stop the flood of closures?
5 What is Covid Tracker Ireland?
6 Varadkar and Donohoe to meet banks to discuss mortgage breaks
7 US court throws out $1.5bn alleged corruption case against Digicel
8 Irish Rail losses up slightly despite record passenger numbers
9 WeWork on track for profits in 2021, says chairman
10 When I’m 65: five ways you’ll benefit
Real news has value SUBSCRIBE