Ten councils did not spend any money, three didn't apply for funding, three spent less than half 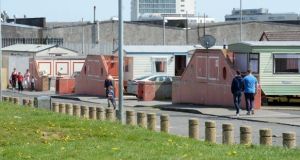 Just two thirds of the funding allocated for Traveller accommodation was spent last year, according to new figures.

Of the €13 million provided by the Department of Housing for Traveller accommodation last year €8.6 million was spent by local authorities and 10 authorities did not spend a cent. These are Donegal, Galway City, Laois, Leitrim, Longford, Mayo, Monaghan, Tipperary, Westmeath and Wicklow.

The figures were provided to Sinn Féin’s housing spokesman Eoin Ó Broin and described by him as “totally unacceptable”.

They come as data from the Department show there are more than 1,000 Traveller families living in unsafe, insecure or overcrowded conditions.

According to its most recent “count” of Travellers’ housing conditions, in 2018 a total of 591 families were on unauthorised sites, ie by the side of the road and usually without running water, toilets or secure electricity, and a further 927 were sharing accommodation with other families.

A total of 117 families are by the side of the road in counties that did not spend any money on accommodation last year, including 32 families in Co Mayo and 31 in Co Tipperary.

However three that spent nothing did not even apply for funding, including Mayo which has 47 Traveller families in unsafe or overcrowded conditions. Galway city council and Laois county council also sought no funding last year.

“With Covid-19 we see how physical distancing and how having a place to call home is vital to slowing the spread of this virus.

“If Sinn Féin is part of the next government we will urgently implement the recommendations of the Report of the Expert Group on Traveller Accommodation which was published last summer.”