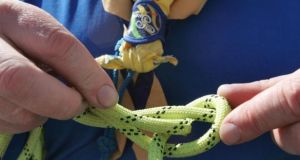 In 2018, The Irish Times revealed that Scouting Ireland’s handling of a rape allegation, concerning two adults, had been “deeply flawed”.

Scouting Ireland has published a major report into the historic child sexual abuse scandal in legacy scouting organisations. The report was compiled by child protection expert Ian Elliott and lays bare the scale of the past abuse.

The roots of the controversy facing Scouting Ireland date back more than two years. Here is how the scandal unfolded:

Back in February 2018 The Irish Times published a front page story thatrevealed Scouting Ireland’s handling of a rape allegation, concerning two adults, had been “deeply flawed,” and a confidential report had criticised safeguarding standards in the youth organisation.

In 2016, a female volunteer made an allegation to Scouting Ireland, claiming she had been raped by a male volunteer, on a camping trip in 2009 when she was 18-years-old.

Scouting Ireland had hired Mr Elliott in 2017 to conduct a detailed review of how the organisation dealt with the allegation. His report criticised the actions of four senior volunteers; chief scout Christy McCann, chief commissioners David Shalloo and Thérèse Bermingham, and Ollie Kehoe.

The review found the accused male volunteer had sought to put pressure on those managing the case. The man was suspended from the organisation following the allegation. Gardaí investigated the matter, but the Director of Public Prosecutions directed against prosecuting, after which he was reinstated.

Mr Elliott’s report made several recommendations on how to address overall safeguarding failings in the organisation, including advising that an audit of how past child protection cases were handled take place.

In April 2018, The Irish Times reported the male leader accused of rape had not undergone Garda vetting before being readmitted into Scouting Ireland, despite recommendations from gardaí that this take place.

In response, Ms Zappone decided to suspend State funding to Scouting Ireland over governance concerns, worth nearly €900,000 a year and a key source of income.

In the days that followed, the four senior volunteers criticised in Mr Elliott’s review stepped aside, pending an independent barrister’s inquiry into the handling of the case. The inquiry would later find the four had acted “inappropriately” in the case.

Former Senator and children’s rights expert Jillian van Turnhout was appointed by Ms Zappone to carry out a review of the organisation’s governance. Her report was published in June 2018.

It concluded there was a “deeply rooted dysfunction” at the top of the organisation, due to a lack of transparency, and a culture of “blind loyalty” to certain senior figures.

The board of Scouting Ireland committed to implement a series of recommendations made by Ms van Turnhout, including that an entirely new board be elected. Following these commitments Ms Zappone released three months State funding to the organisation.

While the public controversy was playing out, Mr Elliott was conducting a review of historic files, while also acting as Scouting Ireland’s interim safeguarding manager.

The review would include an audit of historic case files held in the organisation’s headquarters at Larch Hill, interviews with former members, and information from abuse survivors who were beginning to come forward following media coverage.

Scouting Ireland members were due to ratify an overhaul of their governance structures, and elect an entirely new board at an Extraordinary General Meeting (EGM) on October 6th, 2018.

However in the weeks before the key meeting , the existing board voted to reinstate Mr McCann to chair the membership meeting. On foot of the decision Ms Zappone again suspended the organisation’s funding, until a new board had taken office.

Upon the election of a new board at the EGM, funding was restored pending continued governance reform progress.

On November 21st, 2018, the findings of Mr Elliott’s initial review of past child sex abuse in the organisation were revealed to the Oireachtas committee on children and youth affairs. The review had identified 108 alleged victims of abuse, and 71 alleged abusers, who had operated mainly between the 1960s and 1980s.

Scouting Ireland formed in 2004 following a merger of two legacy organisations; the Catholic Boy Scouts of Ireland and the Scout Association of Ireland.

Following the bombshell revelations large numbers of other survivors began to contact the organisation, with Scouting Ireland setting up a dedicated helpline to take the calls.

By December 10th, the number of past abuse survivors had increased to 317, and 212 alleged abusers, then-chair of the board Aisling Kelly told a private meeting of senior members.

There was emerging evidence that abuse was “covered up” for decades. Volunteers who allegedly preyed on children were “protected” and permitted to move from group to group, Ms Kelly told the meeting. Those details were reported by The Irish Times on December 11th.

In February 2019, Tusla, the child and family agency, threw Scouting Ireland into a fresh controversy over current standards, raising concerns with the handling of recent safeguarding cases and supervision on overnight camping trips.

A letter raising Tusla’s “serious concerns” and questioning the “viability” of continuing overnight trips was made public by Ms Zappone in a speech on the floor of the Dáil. Scouting Ireland robustly defended its current practices and supervision standards on foot of the criticism.

At this stage Mr Elliott had begun work on a comprehensive final report on the historic abuse scandal.

In June 2019, Scouting Ireland committed to make an institutional apology to the victims of past abuse. The number of alleged victims had increased to 321, and 247 alleged perpetrators, as well as a further 70 victims of alleged youth-on-youth abuse. However, it was decided to postpone the apology until Mr Elliott’s report was completed.

Last November, Taoiseach Leo Varadkar told the Dáil the Government would consider the establishment of “a commission of investigation or a statutory inquiry of some nature” into the historic abuse. He was responding to calls for an State inquiry from Fianna Fáil leader Micheál Martin, on foot of an RTÉ Investigates programme on the scandal.

On Thursday, May 14th, 2020, Scouting Ireland published Mr Elliott’s final report into historic child sex abuse in legacy organisations, and made an organisational apology to all survivors of past abuse.