35,000 visitors expected to travel from the US for meeting of Notre Dame and Navy 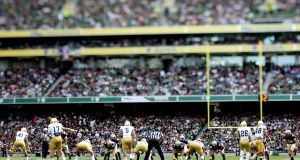 Action from the 2012 meeting of Notre Dame and Navy at the Aviva stadium. The two sides are scheduled to meet again at the stadium on Saturday, August 29th. Photograph: James Crombie/Inpho

Organisers of the 2020 College Football Classic set for the Aviva Stadium on August 29th are still exploring the possibilities around the game going ahead as scheduled despite the continuing restrictions around Covid-19.

With a decision on the matter due next week, it appears increasingly likely that some postponement or rescheduling will be required, that decision ultimately coming down to governing body of American collegiate sport, the NCAA, and the visiting teams from Navy and Notre Dame.

“The NCAA are still working through their scheduling of games, and whether they will go ahead or not, same as every major sporting fixtures in the coming months,” said a spokesperson for the event.

“They are close to that decision, but just asked for a little more time to work through it, on the America side, with an update due in a week on the broader picture.”

The game, which also marks the opening game in the NCAA college football season, falls three days before the present restrictions on crowds at outdoor events of 5,000, with over 35,000 American visitors expected in Ireland for the event, worth over €50 million to the Irish economy. The event organisers have already outlined that the event does not fall under the restrictions as it does not require a licence but that “public health and safety advice will remain paramount”.

This year’s event received a considerable boost when it was confirmed that ESPN’s popular College GameDay would broadcast the pre-game show live from Dublin. With no other game scheduled for that date, the game was being billed as Week Zero of the College Football season, with huge TV viewership numbers expected.

Sponsored by Aer Lingus, the game is being organised by a new entity called Irish American Events Limited (IAEL), which is a joint venture between Corporate.ie and Anthony Travel who have been involved in the recent college football games in Ireland.

The game is billed as “the longest uninterrupted intersectional rivalry in college football”. It added: “Notre Dame and Navy will kick off their 2020 seasons in the 94th meeting of the longest uninterrupted intersectional rivalry in college football. The Irish and Midshipmen will be making their third visit to Ireland; in 1996 they met in Dublin at Croke Park for the first time with the Irish defeating Navy 54-27, and then again defeating Navy 50-10 at Aviva Stadium in 2012. It is expected that 35,000 fans will travel from the US and Europe to take in the full College Football event experience.”

1 Monica Seles: The warrior queen who could have been the best ever
2 IRFU in line for €75m windfall as CVC acquire 14.5% Six Nations stake
3 Bryson DeChambeau motors home with 65 to win in Detroit
4 Eamon O’Shea: We spent quite a bit of time talking about older people rather than to them
Real news has value SUBSCRIBE