A family divided: ‘We didn’t say a proper goodbye that morning’ 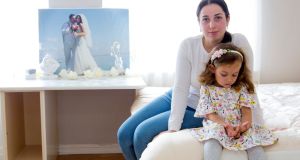 Viktoria Gagkaeva and her daughter, Alina (4), in the bedroom of their Galway home. Photograph: Brian Farrell

Vahram Harutyunyan missed his daughter’s fourth birthday party in Galway on Thursday because they have been separated for almost a year.

On August 15th last year the Armenian-born barber, who has lived in Ireland for almost 13 years, was deported, leaving his wife, Viktoria Gagkaeva, and their Irish-born daughter, Alina, behind .

He had gone to Dublin for a regular appointment at the offices of the Irish Naturalisation and Immigration Service but shortly after arrival was arrested and within 24 hours was on a flight to Armenia.

Gagkaeva says apart from a five-minute phone call when he was surrounded by gardaí, he never got a chance to say goodbye to his family. After being detained, his phone was taken from him, he was put in prison and then put on a flight in the early hours of the following morning, she says. “I got a voicemail at 4am saying he was on the flight. There were four gardaí with him, sitting alongside him in the back of the plane. He said he felt like a murderer.”

She breaks down when she recalls how she tried to make sense of that five-minute call when her world fell apart as her husband apologised for having to leave her alone with their child.

“We didn’t say a proper goodbye that morning as he was late and ran out the door, saying ‘My God I will miss the bus’ ”, she recalls. Her husband had for three years regularly signed on at the immigration service office on Burgh Quay in Dublin, having sought legal advice about how to regularise his situation.

Vahram had spent a short while in direct provision after arriving in Ireland in 2006, but hated it because he wanted to work and help his family, so he just left. “He always worked. He never applied for social welfare here. He was shamed by it.”

Gagkaeva acknowledges a deportation order was issued against her husband before she met him. After they became a family he wanted to sort out his situation and so made contact with the authorities, she says.

“He was hoping that the Government would understand we are a family. We have done nothing bad for this country. We always worked,” she says. The couple got married in Salthill in 2015.

Gagkaeva was born in Russia and spent eight years in direct provision here, from the age of 14. She and her family have been granted leave to remain and will be eligible to apply for Irish citizenship next year. Her parents live in Cork, and she says since her husband’s deportation she feels alone.

Alina spent weeks waiting every evening at the door of their apartment in Renmore, thinking her father would return , according to her mother. “I said, ‘He is not coming’. It was so tough. Nobody knows how much she misses him. I think she sees him in her dreams and when she wakes and he is not there, she cries and says ‘Why is he not here?’ ” Gagkaeva says Alina was so traumatised she was forced to give up work.

Gagkaeva worked as a beautician in Galway city and Harutyunyan usually picked their daughter up at the creche. “Her eyes used to light up when she saw him ,” recalls Tracy Lee, who looked after Alina there. “She was obviously Daddy’s girl and she was very bright and bubbly, but when he left she seemed sad and lost". Remzi Ozdiner, who employed Harutyunyan for more than five years at his Turks Barbers in Renmore, says he was “a good guy who always worked hard”.

Gagkaeva and Alina went to visit Harutyunyan some weeks ago but she says Ireland is their home and she is pleading for her husband to be allowed return. “He is sleeping on a couch in his parents’ kitchen. When we got back I was very sad but I was also relieved because I was always worried Alina got sick in Armenia.”

Yesterday on Facebook, Harutyunyan sent birthday greetings to “my sweet princess Alina”, and the mother and daughter made a birthday cake and wished for him to come home.

In a statement the Department of Justice said for reasons of confidentiality neither the Minister nor his officials in the immigration service could comment on individual cases.

It said decisions to repatriate were not taken lightly and were open to judicial review. Enforced repatriation was only carried out as a last resort, it added, and it was open to anyone with a deportation order to make a request to have that revoked. “A request for revocation needs to be based on new information or changed circumstances, which were not part of the original application when the order was made,” the statement said.