Mass and depression: ‘I am sorry for the young people. Where do they go?’ 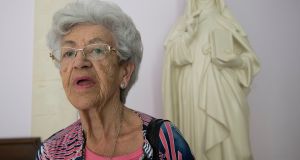 “I am sorry for the young people. Where do they go? Thinking back when we had problems, then you offloaded them. You did a novena and you were expecting an answer. So that gave you belief it was going to get better. Where do they go?, “so responded Massgoer Mary Hewson (83) to the findings of a new study.

It was carried out by the Irish Longitudinal Study on Ageing (TILDA) at Trinity College Dublin.

Such religious attendance was also related to having a bigger social network which, in turn, had a positive effect on the mental health of this cohort of the population, it found.

The study took place from 2010 to 2016 and involved more than 6,000 adults aged more than 50. It uncovers relationships between faith and mental health in Ireland.

It also found that a majority of over 50s in Ireland attend religious services regularly, but that those who said religion was very important to them but who did not attend very frequently had worse mental health than those who did.

At one of Dublin’s most popular city centre Catholic churches is St Teresa’s on Clarendon St, off Grafton St Run by the Discalced (without shoes) Carmelites it offers five Masses daily, four on Sundays, and Confessions Monday to Saturday.

On Thursday afternoon a steady stream of people were coming and going there and The Irish Times stopped some, randomly in the appropriate over 50s age category to discuss the Tilda study findings.

Ms Hewson (83) is from Ballally, Dundrum and feels sorry for young people today. She is convinced that you have to have “a belief in something, even if you don’t believe in it all, and that’s what the young people are missing out.”

When it comes to regular attendance at church services herself, she is “not terrific, but I do hold on to the belief, definitely. And I feel that’s why the young people have so much mental illness, whatever. We believed that you were going to get an answer. Where do they go now?”

She is not a regular visitor at St Teresa’s “only when I’m in town. I pop in. I don’t go to Mass every day or anything” but she does attend Mass every week.

“I am sorry for the young people,” she said.

Tom Sweeney (73) finds regular Mass attendance a help. “It’s the Mass that opens up everything to us. It’s through the Mass we receive, for example, forgiveness of sins, and it was left as a memorial. But it’s the true presence and what greater thing could you have on this earth? That’s what I find.”

From Achill in Co Mayo, he has lived in Dublin all his adult life and has practised his religion all his life . He attends Mass every Sunday. “It’s what we were brought up on. If it did our forefathers…”

Husband and wife Liam Boland and Breda Anne Boland are both “in excess of 70”. When it comes to religious practice “I would probably be more into it than he would,” said Breda. “ I’d be more sceptical,” confirmed Liam.

Breda found it helpful “I do. I go to Mass mostly to pray for other people, people who are ill and may be less fortunate than we are.”

Asked what he gets out of it Liam is direct “I have to say, not a lot.” He goes along because of his wife “sometimes, and sometimes for myself but I would suspect a lot of it is habit. I do it anyway but I’m not…I’m a sceptic. I do it anyway.”

Liam’s scepticism is about the institutional Church “More the institution, because to my mind it’s a business. Big, big business, and it’s unfortunately, run like that. But ok, when you get down to local areas it tends to be more real, but the overall bosses, ” she laughs.

Breda said she “ wouldn’t agree with an awful lot of what goes on in the institution, what went on in the institution. And now we’re just listening to people saying what happened to them in the confession box. I wouldn’t go to confession, not anymore. I stopped a couple of years ago, for various reasons. I make my own peace with God.”

When it comes to being skeptical, Liam said: “I would have to say I always was, especially when I listen to the stories in the gospel. I’d say `how in the name of God,…?’ You know, all that kind of thing.”

But Breda said she liked “ some of the stories in the gospel. One night, for instance we had our grandchild at Mass. She was only six or seven and she was listening to the story of (the wedding feast at) Cana and when it was all over she said to me ‘I particularly liked the story he told us’. She was listening.”

The study also found that over the period from January 2010 to December 2016 religious attendance declined slightly for both men and women, from 91 per cent to 89 per cent where women are concerned, and from 89 per cent to 87 involving men.

It also found that men for whom religion was important but who did not attend services regularly had higher depressive symptoms than women in the same category, and that the size of an individual’s social network accounted for at least part of the relationship between attending religious services and lower depressive symptoms.

Prof Rose Anne Kenny, principal investigator at TILDA, said: “The importance of continued social engagement and social participation as we age is well established and has been associated with improved health and wellbeing and lower mortality.

“If religious attendance facilitates older people to maintain a larger social circle with continued social engagement, alternative ways to socialise will be necessary as we develop into a more secular society.”

The new TILDA study is published in the peer-reviewed journal Research on Aging.