Asylum seekers in Wexford refuse move to Wicklow and Clare

A total of 1,068 people, including 177 children, residing in emergency accommodation 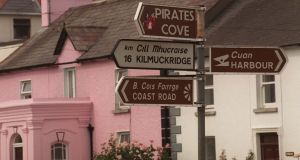 Courtown. The Department of Justice said the decision to relocate the group to centres in Co Wicklow and Co Clare was made as the Courtown Hotel was more suitable for children and families requiring schools. File photograph: Jack McManus

Twenty-two men and women living in an emergency accommodation centre in Courtown, Co Wexford, have refused to leave the town after they were told they were being moved to counties Wicklow and Clare.

The group of asylum seekers, all of whom are unmarried, were told by the State’s Reception and Integration Agency last week they were to be moved from the Courtown Hotel where most have lived since April.

However, they said they did not want to leave, saying they had put down roots, built friendships and got involved in the local Tidy Town committee and other local events .

Eighteen refused to board the bus which arrived on Monday, telling Reception and Integration Agency (RIA) officials that they would only leave if they were going to long-term accommodation.

The Department of Justice said the decision to relocate the group to centres in Co Wicklow and Co Clare was made as the Courtown Hotel was more suitable for children and families requiring schools.

International protection applicants do not have to accept accommodation offers, but the RIA may need to relocate residents on occasions, said the justice spokesperson, adding that every effort was made to find suitable accommodation.

One thousand and sixty-eight asylum seekers live in 30 emergency centres, including 177 children. In December 2018, there were 210 people sleeping in emergency beds.

The Irish Refugee Council (IRC) has called for all families to be moved immediately from these centres, expressing concern around whether all children housed in them were enrolled in school.

“It is clearly set out in law to ensure that a child in the asylum process gets the same education an Irish citizen would,” he said. “We’ve heard of parents preparing themselves to get their children into schools for September.”

Some residents in such centres are not getting temporary residence certificates without which they cannot get PPS numbers, the weekly €38.80 asylum allowance, or a medical card.

The asylum seekers’ accommodation system is under “immense strain”, said the justice spokesperson, adding that the RIA was working to reduce its reliance on emergency accommodation.

The need for such temporary centres was “a regrettable but necessary feature”, the spokesman said, and plans were in train to open new dedicated accommodation centres nationwide.

Beside those in emergency accommodation, there are 6,033 people living in direct provision centres, including 780 people already granted refugee status or permission to remain unable to secure housing.

A total of 2,234 applications for international protection were made between January 1st and June 30th this year with an average of 86 people claiming asylum per week.