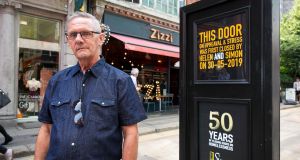 That was the start of it, he explains, standing now in front of an installation on Dublin’s Suffolk Street where the Simon Communities of Ireland is marking a 50 year anniversary of its own, having been founded in 1969.

Michael says he was eight years old when he started drinking and quickly developed a high dependency on alcohol. About a decade later, he found himself living on the streets.

“I was back on the streets again,” he says. “This time around, I suffered two strokes, high blood pressure, and could not manage.

“I suffered injuries and wouldn’t stay in hospitals because I’d be left on trolleys too long. I was also in alcohol withdrawal so I’d have to go out and get a drink.”

He went to the Dublin Simon Community and explained his situation.

“I had all my bags with me and was a broken man,” he says. “When I went in the door, I told them my story and they said to go away and they’d give me a ring in about 15 minutes.

“I was walking down the quays when they rang me back and the weight came off my shoulders and I started crying. I haven’t looked back since.”

Michael was given a house by the charity and is now living in Dublin city centre. He describes himself as a confident, happy man with healthy relationships in his life.

“They’ve given me the key to my own home,” he says. “I’ve been to rehabilitation centres and recovery houses with them. I’ve done the complete programme and I’m now going studying addiction counselling.

“I’m a carpenter by trade but I want to put that aside now and reach out and help others in the homeless sector. That’s all I want. I was on a dark, dark road. It was a horrible situation. There was no way of describing it. It was just hell.

“When you get the key to your own home you have a totally different outlook. My sister was home from Australia and I had somewhere to bring her to sit down, have a chat, go out to my garden, and look at the flowers I’ve planted.”

Michael is one of thousands of people the Simon Communities Ireland charity has homed in recent years. Its “closing the door on homelessness” campaign, unveiled on Thursday, is marking 50 years since its foundation by telling stories like Michael’s.

“They are all long-term tenancies,” he says. “We initially provide necessary supports in there so people are connected with their doctors, with the infrastructure in the area, with the community.

“You can’t take someone who is in emergency accommodation and then immediately parachute them into somewhere that may not be their local area without the supports to help bed them in and secure them in that area.”

The problem of homelessness is a nationwide issue, as Karen Golden, chief executive of Galway Simon Community, explains.

“Homelessness has been growing faster in the west of Ireland than it has in any other regions of the country,” she says.

“We’ve had more than a fivefold increase in the number of people in emergency accommodation over the last four years. That’s in spite of the Government reclassifying people out of the numbers. The picture is far greater than the numbers suggest.”