Pop-up service to open near Hyde & Seek creche in Ballybough 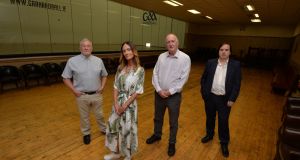 A free pop-up childcare facility is to open in the Croke Park handball centre in Dublin for children who attended the Tolka Road Hyde & Seek creche featured in an RTÉ Investigates programme last week.

A group of women from the northeast inner city, who protested outside the Ballybough creche last Friday, are volunteering to provide childcare to help parents who no longer want to use Hyde & Seek.

The RTÉ undercover documentary raised concerns about the standard of care and conditions at the Tolka Road creche and other Dublin creches that are part of the Hyde & Seek chain, owned by Anne Davy.

A local mother, Sorcha Finnegan, said: “After the protest some people said we didn’t care about the parents who have to put their children into the creche because they can’t get another place.

“But we had the protest because we feel really bad for the parents who had to go to Hyde & Seek. So after talking to a few of the neighbours, we decide that, while we are not official childcare providers, we are good women and good parents and we can do something to ease the burden on other parents.”

Ms Finnegan said she and seven other local mothers decided to offer a child-minding service to parents who had already taken their children out of the creche but could not find another place for them, or still had children in the creche but wanted to remove them.

“We’ve all heard about pop-up restaurants and we thought why not have pop-up child-minding, to help parents through their transition period until they can set up something permanent? The next thing was to find somewhere to do it.”

The group have been offered the use of the Croke Park community and handball centre, which is less than five minutes’ walk from Tolka Road. All the carers will be Garda vetted, Ms Finnegan said, with some, including herself, having already been vetted because of previous work with children. Some of the women are currently part-time childcare workers, and will help out during their spare time.

“We will work out a rota system between us so we can provide care for as long as parents need it. We really want to help. We think it’s disgraceful what these parents, who have to go to work, have been put through.”

Ms Finnegan is appealing to caterers to provide snacks and lunches for the children, and would ask parents to supply their own nappies and wipes, but there would be no charge for the service.

She did not believe parents who had not been users of Hyde & Seek would take advantage of her generosity. “I don’t think anyone would do that. The children we would be taking would be just from Hyde & Seek, and we would be able to check that if we needed to.”

Independent councillor Nial Ring, who is on the board of management of the handball centre, said it was already insured to take children’s groups.

“The management committee was delighted to be able to help out with this,” he said.

It is hoped that the service will start on August 12th.